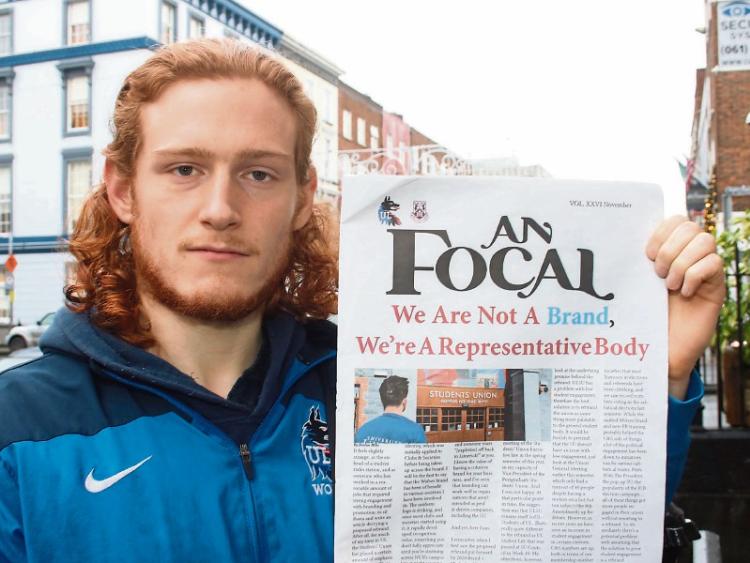 Seamus Toomey, outgoing editor of University of Limerick’s newspaper An Focal, said he wanted to step down due to the “workload and my obviously deteriorating mental health” Picture: Michael Cowhey

A BITTER war of words has erupted between the University of Limerick Students’ Union and the campus newspaper, after a decision was made to change An Focal to a monthly publication.

A spokesperson for ULSU said that the decision was made in response to “the particular experience” it had with its outgoing editor Seamus Toomey, who held the position since August.

It said that the quality of the bi-weekly campus paper “deteriorated considerably in terms of layout, spelling, grammar, use of colour and overall design”, and that there were issues with distribution.

The Union’s statement came after it claimed that its general manager Martin Ryan “was not given the right of reply” in relation to two recently-published comment pieces, entitled “Editor’s farewell” and “The SU are changing An Focal: Here’s why that’s bad”.

In an e-mail to Mr Toomey, seen by this newspaper, Mr Ryan said that there were “mistruths and inaccuracies” in these articles.

Asked what these “mistruths” were, the SU spokesperson said that the “editor goes into detail about why a monthly paper doesn’t work and mentions how a shift to online would be better”.

Mr Toomey told the Leader that he received “angry e-mails” from Mr Ryan after the publication, as “I had not given him the right of reply and he and others were irritated by the content in the paper”.

He added: “These e-mails were sent to myself and their staff members who I shared an office and workplace with, and that caused me great anxiety for my last two weeks there.”

He said that he had wanted to leave his position due to the “workload and my obviously deteriorating mental health”.

ULSU said that Mr Toomey did not raise these concerns with the general manager.

Mr Toomey said that while his time as editor “was far from perfect, there was plenty of good about the paper”, adding that layout and design issues were “almost all resolved after the first issue”.

ULSU said that it received “a lot of complaints from students about the quality of the newspaper and how it had dropped in standards from previous years”. It said that “this caused us concern”.

It said that the decision to change An Focal to a monthly issue “was never about cost”, and that it had hiked its expenditure on the paper over the past two years.

It said that they had discussed the possibility of “paying more for an experienced editor” who would focus more online and create “more opportunities” for contributions from students.

Mr Toomey, a UL BA Journalism & New Media graduate, said that it “came as a shock to hear about the changes which I was informed about in one short e-mail on the day of the content deadline for the last edition of this semester”.

He claimed that “no one from An Focal was involved in the discussion or made aware of the proposals being brought forward”.

ULSU said that its staff and sabbatical officers “have never tried to push change under the radar.

“At all times this past semester we consulted with elected students of Executive and Council. The student reps of Council made the recommendation to put the focus on the online An Focal articles.”

Mr Toomey “highly contests that I had done any reputational damage to the paper”.

In a two-page statement, the outgoing editor concluded: “The last two weeks have been a low point in a job I was already not happy in, and at this stage, all I want is to put this behind me.”

Ms Gabbett said that they are working with the UL School of Journalism on the future of the publication.

Meanwhile, UL Head of Journalism Mary Dundon has urged ULSU to reconsider its move to turn An Focal into a monthly newspaper.

“This would totally eliminate its value as a newspaper because all the stories would be too dated by the time they were published. This move would turn An Focal into a magazine, rather than the campaigning student newspaper that was its original remit.

“An Focal has provided a very good training ground for our journalism students in giving them an outlet to develop their news writing skills and building up a portfolio of stories. I would urge the Students Union to reconsider this move.”

The Students’ Union has advertised for the role of editor of An Focal online and print, and have received at least nine applications as of December 1.