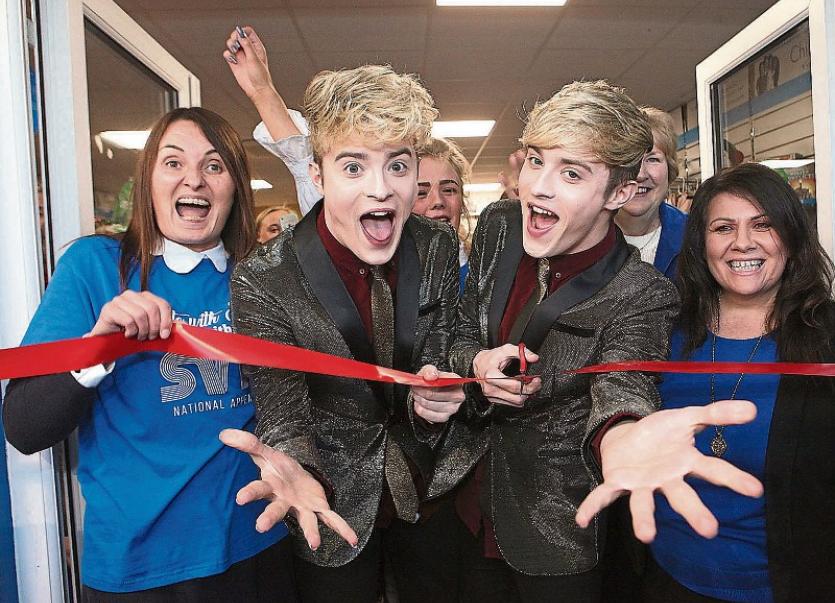 POPSTARS Jedward have revealed that St Vincent de Paul got them into style for the X-Factor, as they opened a new shop for the charity in Limerick.

Speaking at the launch of SVP’s new store in Roxboro Shopping Centre, X-Factor stars Jedward said the charity was more than a just a shop, it "provides a friendship to those who need it".

“They don't just provide clothes, they provide services to people and friendship to those who don't have anyone else," said Edward.

“We also wanted to get involved because we always bought our clothes in St Vincent de Paul, since our X-Factor audition days, all the clothes we wore in X-Factor we bought in St Vincent de Paul; shirts and ties, because when we were in school we didn't have loads of money, so we used to buy shirts and ties there that got us in to style," said Edward.

“It's cool because vintage clothes are like the height of fashion now and during the days of Kurt Cobain everyone used to shop in vintage shops, you could go to the high street and buy what you want to buy, but it's just nice when you come into a place like this you never know what you can expect,” added John.

Large numbers of fans turned out to see the pair cut the ribbon on the new store, with many children and teens forming an orderly queuing to see their idols - who stayed for almost three hours to meet and greet their many fans on Thursday evening.

The pop stars, who have a close connection to Limerick as their father grew up in Mayorstone Park in the city and a number of family still live here, said: “St Vincent de Paul is about creating a community and Roxboro is not in the city centre, so people from the surrounding areas are going to shop here."

The pair, who are SVP ambassadors, have been opening shops for the charity in Dublin, Belfast and now Limerick.

The twins talked about their close connection to the city, with their aunt, uncles and cousins all still living in Limerick.

“Limerick is great and we have loads of really good memories and we love the spirit here,” said the pair.

Popping in to say hello and greet the pop-stars was TD Willie O'Dea, who said that the pop stars were “good friends to us”.

“Coming here when they are very busy shows their respect for what's going on here and their support for (the charity) and we are all very grateful for that,” said Deputy O'Dea, who donned one of twins jackets and had his hair done by Jedward.

To mark Jedward's support for the charity, they were presented with a certificate of thanks from St Vincent de Paul.

- Read more about Jedward's visit to the city in Monday's Leader