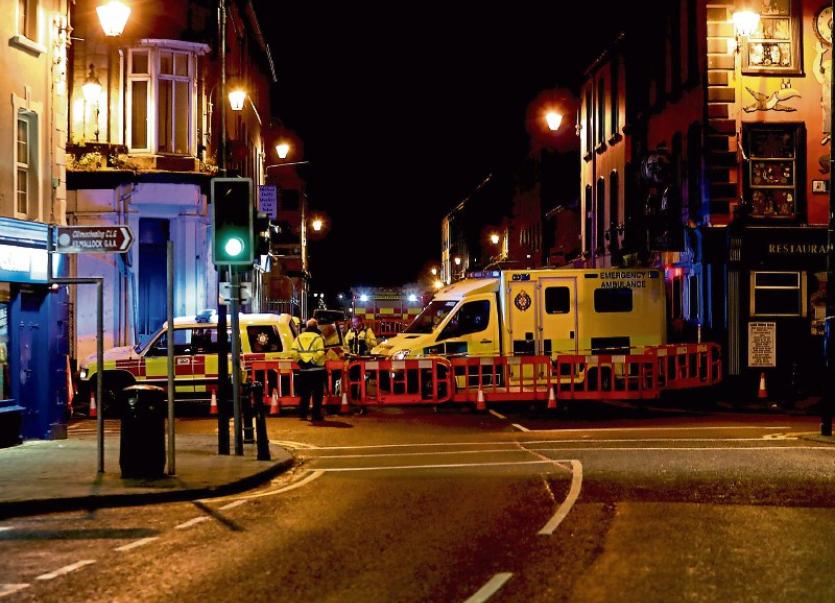 The scene of last year’s accident at Lord Edward Street, Kilmallock. A verdict of misadventure was recorded at Limerick Coroners Court

A VERDICT of misadventure was recorded at the inquest into the death of man who walked in front of a truck while attempting to cross the street in Kilmallock.

Limerick Coroners Court was told Tadgh McCarthy (54), who lived in Kilmallock, died from catastrophic crush injuries after he was rolled over by a truck at Lord Edward Street in the town on December 7, 2016.

Coroner John McNamara was told the accident happened shortly after 5pm near the junction of Sarsfield Street and Lord Edward Street.

Garda Pat McEnery said he and a colleague were in slow moving traffic when they observed a commotion ahead and people signalling the gardai to stop.

He said upon further investigtaion he observed the body of a male which appeared to be trapped under the front of a red Skoda Fabia car.

While CPR was initially administered to Mr McCarthy, Garda McEnery said it was obvious he had sustained “significant and severe” injuries.

After he was pronounced dead by a local doctor, the scene was cordoned off and a garda investigation launched into the circumstances of the accident.

Garda McEnery said he spoke to the driver of the Skoda Fabia who informed him that he had stopped immediately after he felt a bump on the road.

He told the inquest he also became aware that a truck may have struck Mr McCarthy and he made arrangements to speak with the driver who had phoned his employer.

Forensic collision investigator, Sergeant Kevin Bourke, said CCTV footage showed Mr McCarthy stepping from a footpath “in front of the truck” as it began to move after the traffic lights turned green.

He said he was satisfied from the footage that the truck had rolled over Mr McCarthy and that he was lying flat on the ground when he was struck by the Skoda car.

PSV inspector Michael Reddy who examined both vehicles said he found some “light cleaning marks” on the underside of the truck which indicated it may have rolled over something.

He said the truck, which was driven by a Polish national, was in good working condition and that it was fitted with collision avoidance technology in accordance with EU regulations.

However, he said it was likely the system would not have detected Mr McCarthy, given his close proximity to the front of the truck when he stepped out.

Garda Reddy added that while the truck’s Cyclops mirror was dirty, he did not believe this was a factor in the accident as the vehicle was moving when the impact happened.

Consulant Patholgist Dr Terézia László said a post mortem examination which was conducted at University Hospital Limerick showed Mr McCarthy sustained serious head injuries in the impact and that all of his ribs were fractured.

She said a high level of alcohol was found in his blood along with the prescribed medication Lamotrigine which, she said was at a “mid range” level.

Dr László said Lamotrigine can cause diziness and drowsiness and that when mixed with alcohol it can result in blurred vision.

Death, she said, was due to “multiple serious traumatic injuries consistent with a road traffic accident”.

Having considered the evidence, Mr McNamara said it appeared there was “nothing much” the truck driver could have down in the circumstances.

“It was a dark evening, the truck was moving, he stepped into the path of the truck,” he said.

The jury of four men and two women returned a verdict of misadventure in accordance with the medical evidence.