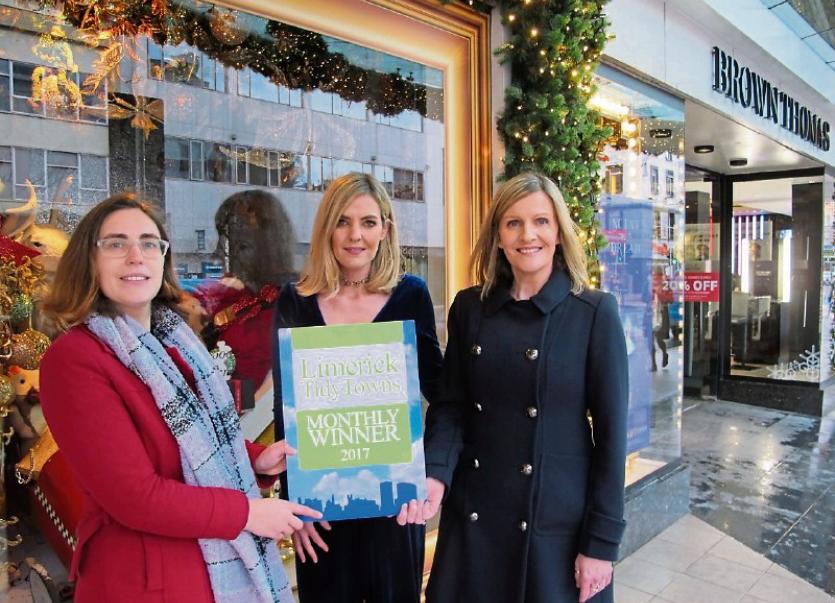 ONE of Limerick city centre’s prime retail spots has been honoured with a Limerick Tidy Towns award.

Brown Thomas, located in the heart of the city, has won the monthly award for both November and December, for what the judges say is being “an integral and positive part” of local retail, particularly around Christmas time.

Maura O’Neill, Limerick City Tidy Towns, said: “We usually focus our monthly awards on smaller businesses, but we felt this year that it was important to recognise the hugely positive impact Brown Thomas has had on Limerick city for many years, and how wonderfully their Christmas decorations enhance the heart of the city’s retail centre.”

“The impact their festive lights and window displays have at the hub of the city centre is clear for all to see, but throughout the year, the store also consistently maintains an impeccably clean exterior, with regular window cleanings and litter-picks outside all store entrances, and at the rear of the property.

"As well as that, when the store acquired new Christmas decorations a couple of years ago, their previous decorations were recycled by way of donation to The Hunt Museum, something that is a vital element of the Tidy Towns ethos,” she added.

Brown Thomas is the eleventh and final Limerick City Tidy Towns winner for 2017.

All the monthly winners are in with a chance of winning the overall prize for 2017 at the annual Tidy Towns awards to be held early in 2018.

If you wish to volunteer with Limerick City Tidy Towns they meet every Sunday morning at 11am at the corner of Thomas Street and O’Connell Street, and on Wednesday evenings at 6pm outside the White House during summer months. All are welcome.