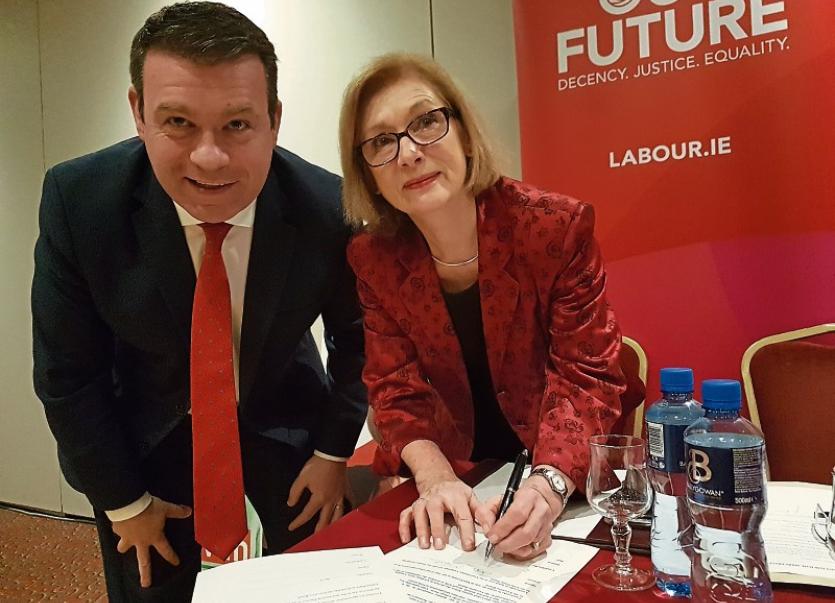 FORMER Education Minister Jan O’Sullivan has been unanimously selected as Labour’s candidate in the next general election.

Ms O’Sullivan, will be contesting her ninth Dail election for Labour, having been elected at the third time of asking in 1998.

She won the seat vacated by the late Jim Kemmy, and was returned in 2002, 2007, 2011 and at the last election, where she dramatically came from 800 votes adrift to snatch the final seat.

Speaking after her selection convention at the Kilmurry Lodge Hotel, Ms O’Sullivan said: “What we stand for is integrity and true respect for all citizens.

“Limerick is on its way; we have made great strides in bringing jobs but there are still many communities left behind, there is still a crisis in the A and E at University Hospital Limerick. The M20 has been promised but not yet progressed and the National Planning Framework is not strong enough in its ambition for Limerick, to say the least.”

The Limerick City TD believes she has the “experience and passion” to fight these battles.​

“Limerick needs a Labour Voice in the Dáil. Unlike those on the hard left we don’t just shout about what’s wrong, we get stuck in and do something about it, in government and in opposition,” she said.

Ms O’Sullivan was proposed for election by constituency youth officer Conor Sheehan, who said: “Limerick needs Labour and Labour needs Jan O’Sullivan in the next Dail.

“We have enormous potential to build the decent society we all want to live in.  That potential is being squandered away by this ramshackle minority government through regressive budgets that have failed to properly fund the infrastructure we need.”

The constituency selection convention was chaired by the high-profile Tipperary Labour TD Alan Kelly, whose questions to government over the commissioner’s strategy in relation to Sgt Maurice McCabe had led to Fianna Fail’s aborted vote of no confidence, which could have collapsed the government.

While this did not happen, and a Christmas election is off the table, it is widely accepted Ireland will go to the polls early in 2018.

This took place at the Dunraven Arms Hotel in Adare. Fine Gael has already picked its candidates for the city, with Senators Kieran O’Donnell and Maria Byrne flying the flag for the party.