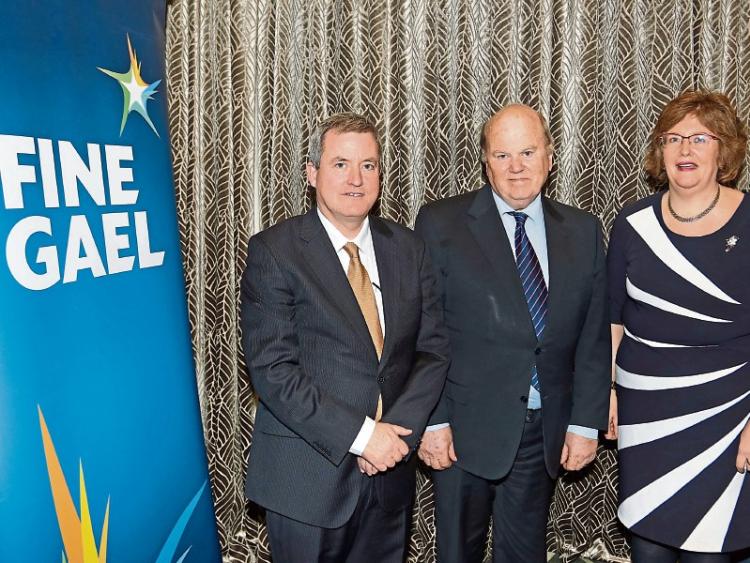 Former Finance Minister Michael Noonan, flanked by Senators Kieran O'Donnell and Maria Byrne, who have been selected to run for Fine Gael in the next election PICTURE: BRENDAN GLEESON

SENATORS Kieran O’Donnell and Maria Byrne will run for Fine Gael in Limerick City in the upcoming General Election.

Following a selection convention at the Castletroy Park Hotel this Monday night, the two members of the Upper House of the Oireachtas were automatically selected after the only other candidate in the race, Cllr Daniel Butler dropped out.

The City West councillor said with the prospect of a short election campaign, he felt Fine Gael would be more likely to win two seats with more experienced candidates.

Mr O’Donnell said he feels “privileged” to be nominated by the party and immediately set his eye on a cabinet role, while Ms Byrne said she felt “honoured” at being proposed by the former Finance Minister Michael Noonan.

Delighted to be selected as a candidate for @FineGael in the next General Election in Limerick City. Looking forward to the campaign. pic.twitter.com/14IOf145gQ

Separately, as the controversy around Tanaiste Frances Fitzgerald continues, Cllr Butler said it is time she should “do the right thing and step down”.

He was speaking after it emerged this evening that the Croom-born politician received three emails advising her of the legal strategy being used by the former Garda commissioner Nóirín O’Sullivan against Garda whistleblower Sgt Maurice McCabe.

For her part, the Tanaiste is resisting calls for her resignation.

“Up until now, I would have been an advocate of due process, with the tribunal taking its process. But the fact this is another omission, it changes the complexion. As much as it may have been a mistake, there are certain standards that come with higher office, and we need to uphold these standards, honour those standards, and i’d like to see the Tanaiste do that,” Cllr Butler said.

Mr O’Donnell said: “I would hope discussions would take place. It is quite evident that the people of Limerick and I expect everywhere else do not wish to see an election before Christmas, and everything has to be done to ensure that does not happen.”

He said he did not see any reason Ms Fitzgerald should resign.

Ms Byrne declined to comment on the whistleblower controversy, only to say: “Frances Fitzgerald has been a very honourable person and has been delivering well in terms of her current brief in jobs.”

And the Tanaiste’s former cabinet colleague, Mr Noonan said he feels the “lights have gone out” on the 32nd Dail.

“The party position is we back her completely, because we didn’t believe she did anything improper, and I don’t think people should be forced out of office for crimes they didn’t commit,” he said.

Addressing the party faithful, Mr Noonan urged Fine Gael canvassers to target second and third preferences to get the two candidates over the line.

Mr O’Donnell was elected in the old Limerick East constituency in 2007, retaining his seat at the 2011 election. But following a backlash against Fine Gael, he lost his seat in 2016.

However, he was returned to the Seanad two months later as a member of the cultural and educational panel.

A former mayor, Ms Byrne served as a local councillor between 1999 and 2016 when she was elected to the Seanad on the agricultural panel. It was a case of second time lucky, having missed out on election to the Upper House by a single vote back in 2007.

- For more, see the Wednesday Limerick Leader and the weekend editions of the paper, out on Thursday