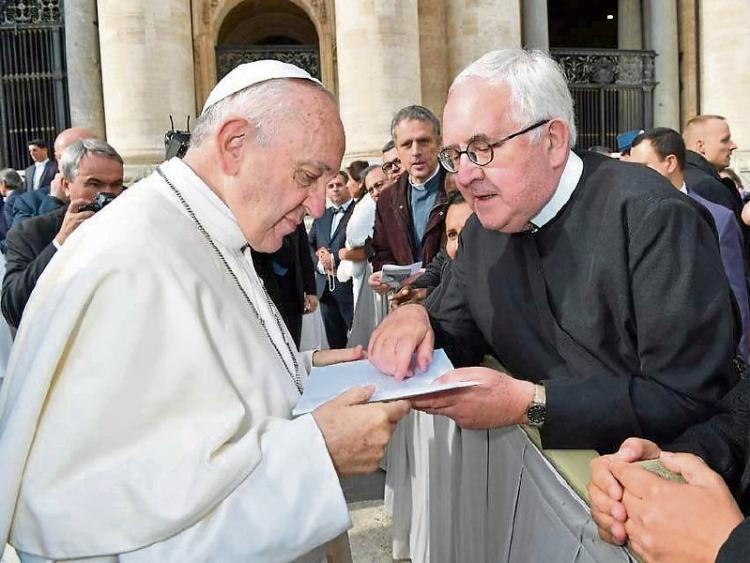 AN invitation has been extended to the Pope to visit Limerick Prison during his trip to Ireland next year.

Fr Seamus Enright, Rector of Mount St Alphonsus, was received by Pope Francis at the end of the general audience at the Vatican. It is the third time the Limerick cleric has met the Pontiff.

While there, Fr Enright presented the Holy Father with letters from prisoners and members of the staff of Limerick Prison inviting Pope Francis to visit the prison when he comes to Ireland for the World Meeting of Families in August 2018.

Fr Enright was able to explain to Pope Francis what the letters were about and to express the hope that he will be able to accept the invitation.

“I mentioned in the prison that I was going to Rome and it was suggested that I might take some letters from the prison community so I took a bundle of letters,” Fr Enright explained.

After receiving a confirmation letter accepting his attendance at the general audience for the Pope, Fr Enright travelled to St Peter’s Square last Wednesday.

“The people who meet him individually are given seats and he just works his way along the line. He chats to everyone. He knows how to work a crowd. He really does. He has a word for everybody. I told him I had brought these letters. They were all written specifically to him. Everybody invited him to go to Limerick.”

The Pope is expected to come to Ireland in August next year for the World Meetings of Families and it has been reported that he will visit one of the 14 prisons in the country.

According to Fr Enright, the Pontiff made no indication of his plans.

This is the third occasion that Fr Enright has met Pope Francis.

“Last year I met him because we were celebrating 150 years of Redemptorist devotion to Our Lady of Perpetual Help.

“The time before that was a few years back, I was in Rome with my sister Maria Enright and some friends of ours. My sister had arranged for us to go to the Pope’s early morning Mass.”