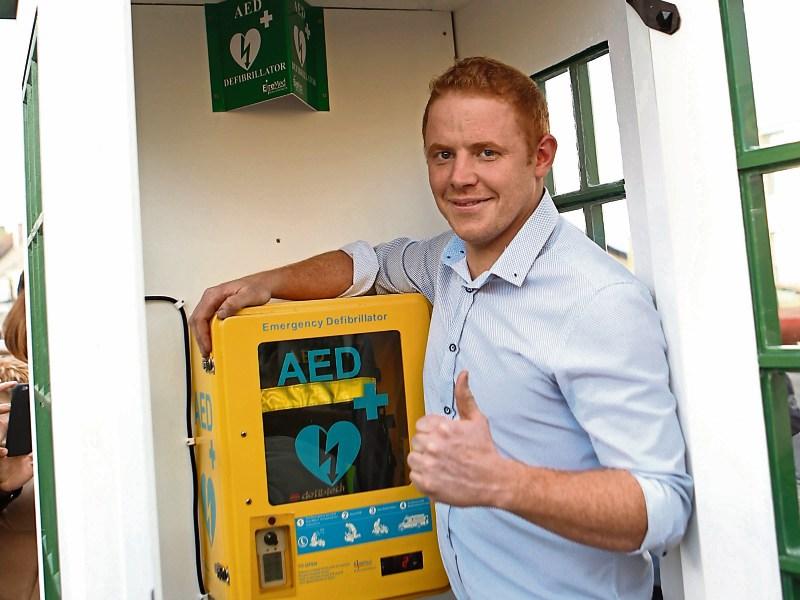 Tommy Hassett came up with the idea of locating a Defibrillator in a former public telephone box in Athea | Picture: Dave Gaynor

AN iconic symbol of Athea’s past now points confidently to the future following a huge community-wide effort which has seen a defibrillator installed in a new home on Con Colbert Street: an old-fashioned telephonebox.

The green-and-white painted phonebox with its new defibrillator was unveiled on Sunday afternoon in an all-party ribbon-cutting ceremony. And there was much joking as the scissors but not the knives were brought out as Cllrs John Sheahan, Francis Foley, Liam Galvin and Seamus Browne did the honours.

The entire ceremony was bestreamed live to Athea-born emigrants in Canada, Australia, USA and Britain as well as in Dubai and Dublin as MC Henry Moran of Athea Tidy Towns acted as master of ceremonies.

It was all a long way from the days when queues would form outside the old phonebox and three-minute calls were made through the operator.   On Sunday though, the sense of wonder hinged on the ability of local craftsman Tommy Hassett to recreate that old P&T phonebox so faithfully. “It’s probably the most high profile job I have done,”  Tommy laughed as locals inspected his handiwork.

Earlier, Fr Brendan Duggan blessed the box and Henry Moran listed all those who had contributed towards making the project possible, including the four councillors who had allocated GMA funding to it.

“You couldn’t put something like that unless people wanted it there,” Mr Moran continued, explaining that when the suggestion went out to the parish, people were 100% behind it. “It took a lot of good will from a lot of people,” he said.

Seán Liston, on behalf of Athea First Responders pointed out that the “defibrillator doesn’t work by itself.” And he appealed for more people to get involved. “CPR in conjunction with a defibrillator can bring somebody back,” he stressed.

Local GP, Dr Kieran Murphy welcomed the new defibrillator in its new, custom-built home which is CCTV secured and at the right  temperature to maintain the equipment.

Athea, he pointed out, was “pretty rural”, located 27 miles from hospitals in Tralee and 37 miles from Limerick, with the nearest ambulance depots in Listowel and Newcastle West.

The national target for emergency help is eight minutes, Dr Murphy said. “That is not going to happen here,” he continued. The best case scenario for an ambulance in Athea is 20 minutes, he pointed out, and Athea was going to have to rely on its own resources. But  Athea is now  a Heart Safe village, he said.