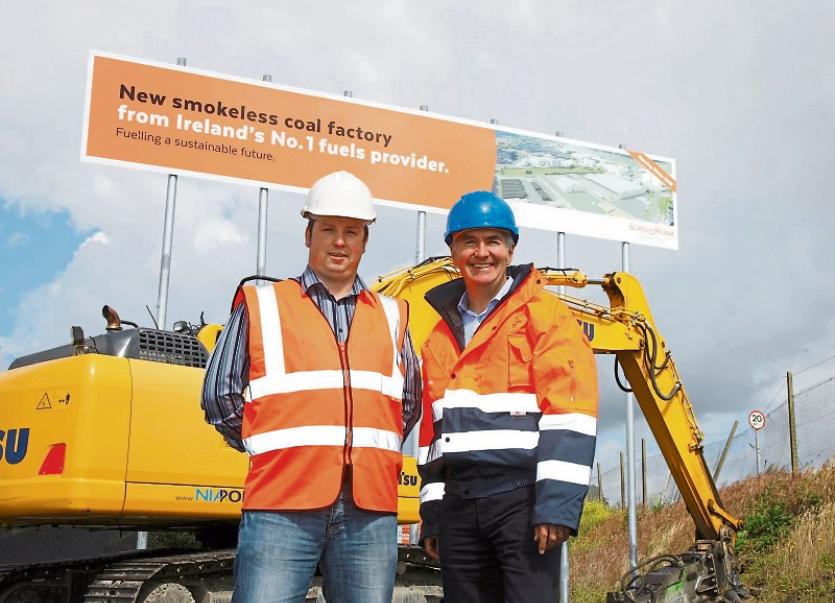 Eddie Scaife, head of Bord na Móna Fuels, and Brian McGuinness, site manager at Bord na Móna in Foynes, when the site was launched for the new Foynes plant

BORD na Móna has responded to claims by a local solid fuel merchant that it is in breach of competition laws because of what he perceives as an unfair advantage afforded to a semi-state company.

Galtee Fuels owner Pat O’Sullivan made the comments in an article in the Limerick Leader in September.

He claimed that Bord na Móna was receiving funding from the State for its new plant in Foynes, which is going to compete locally with his business, which is based in Barrigone.

In a statement, Bord na Móna stated that it does not receive any funding:

“As a commercial semi-state company, Bord na Móna does not receive government funding for any of its operations. On the contrary, unlike private companies, Bord na Móna pays a dividend to the state. This year the dividend amounted to over four million euros to the Irish exchequer. This dividend was in addition to the normal taxation payable to the state by companies that create profits and sustain jobs in Ireland.

“Bord na Móna currently employs over 2,200 people in Ireland and sustains many more jobs indirectly throughout the country,” it stated.

“The Foynes project does not benefit from any state support, subsidy, grant funding or aid. The development of the project has been planned in compliance with Irish and European competition law. The funding for the project will be acquired and managed by Bord na Móna exclusively. Any profit accruing from the venture will be used to reinvest in jobs and the business and also help pay a dividend to the Irish exchequer,” the statement continued.

“Apart from the Foynes project, Bord na Móna is investing significantly in new domestic heating and horticulture products using biomass and green waste materials. The company is also developing and investing further in new technologies to lower the carbon footprint of our operations, generate energy and recover valuable resources from waste materials. The company has already moved significantly on its journey towards a new sustainable business that, continues to pay significant dividends to the State, and remain a major employer for generations to come.”

When contacted for a comment, Mr O’Sullivan said that he stands by his original comments.

“Firstly, I reiterate everything I said in my previous statement, and with regards to Bord na Móna’s response, I wish to state the following: Bord na Móna is using a State-backed balance sheet to compete with private companies, in order to take more control of the solid fuel market, and I would say it is unfair competition,” he claimed.