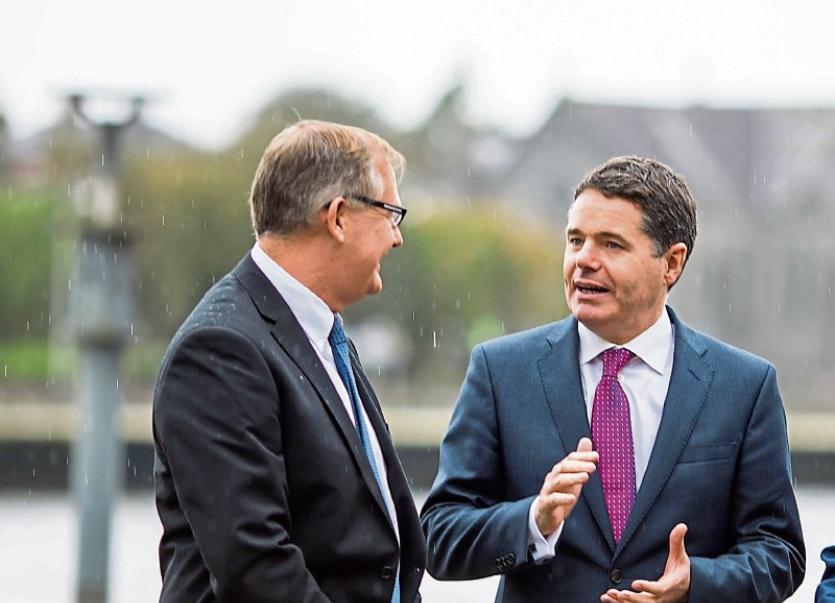 But it also suggests a growth of some 250,000 people in Dublin – and Mr Murray says all the plan does is “reinforces the imbalance between east and west”.

He made the comments at City Hall, where Dublin TD Mr Donohoe was giving a briefing on Budget 2018.

The NPC forecasts one-million extra people in Ireland by 2040 – but of these, just 5% will come to Limerick, it suggests.

But a number of parties have said Limerick is likely to outstrip this target.

“The approach of the development of city regions is the most forward thinking strategy which has seemed to emerge nationally for a long time. However, the scripting is actually limiting the potential of these city regions, and is not addressing the fundamental issue, which is the balance with Dublin,” the chief executive of Limerick City and County Council added.

In response, Mr Donohoe said: “It’s helpful for me to hear your concerns in regard of alleged caps, and your concern that we might be missing a regional trick. That’s not what we are trying to do.”

Chamber chief executive Dr James Ring echoed Mr Murray’s concerns, adding: “I don’t think it’s a very ambitious strategy. We believe the projected growth in the city is limited. There is too much of an emphasis on growth in Dublin.”

He fears that rather than redress the balance, it could bring “three-tiers” to Ireland – high-population growth in Dublin and Cork, and then the remainder of the nation.

“Limerick’s ambition is far higher than what the government’s ambition appears to be,” Dr Ring added.

Chamber president Ken Johnson said: “Dublin is bursting at the seams in terms of housing, whereas there is an opportunity in the west by linking Limerick, Galway and Cork as a broad region and skewing investment this way.”

Mr Donohoe said it is the government’s intention to offer a more “integrated” approach.

“This is the reason we made the announcement on the M20 in advance of the 10-year capital plan. We wanted to send out a clear signal that the main missing link in our national road network was incomplete,” he said.

Limerick City and County Council has linked up with local authorities in Clare, Tipperary, plus the University of Limerick, the Shannon Foynes Port Company, and the Limerick Institute of Technology to provide a comprehensive submission to the action plan.

The deadline for submissions falls on Friday, November 3.

Following this, a final National Planning Framework will be unveiled by the government.