New Limerick criminal courthouse is all set for spring opening 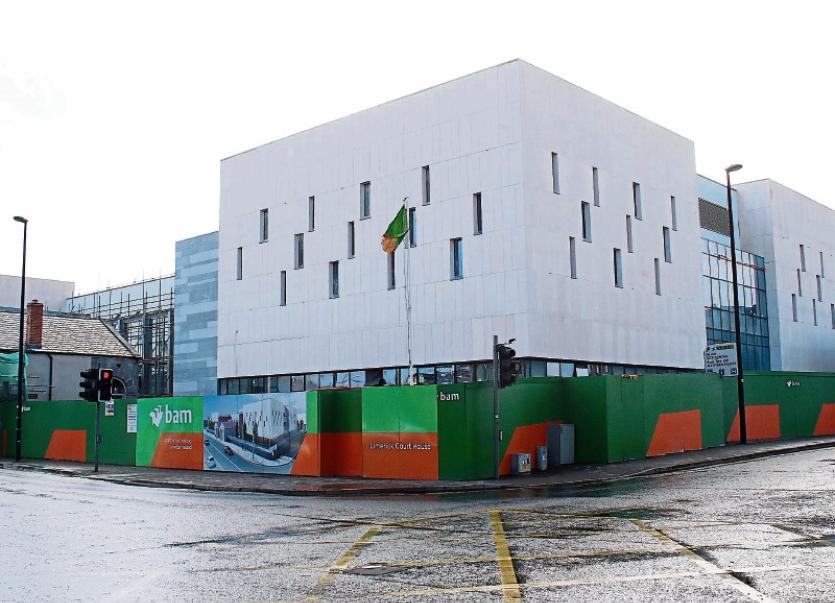 Construction of the new criminal courts complex began last year. It is due to be completed by mid-December Picture: Michael Cowhey

THE new Criminal Courts Complex for Limerick will not now open until early next year, it has been confirmed.

It had been hoped the new multi-million euro facility, which is located at a site adjacent to Limerick Prison, would be completed by the end of this month.

The project, which is being funded through a Public Private Partnership arrangement, was approved by the Department of Justice in 2015 and construction work began last year after BAM Building was selected as the preferred tenderer for the long-awaited project.

The new building, which will house six state-of-the-art courtrooms, custody areas and offices is set to be completed within the next six weeks.

There will be improved facilities for court users and for jurors who are summonsed to serve.

The facility, which will be 7,350 square metres in size, will be located at a site, known locally as Costelloe’s Yard on Mulgrave Street.

Funding to complete the project, which has been bundled with the construction of new courthouses in Cork, Waterford, Wexford, Mullingar, Letterkenny and Drogheda, was included in last week’s budget with the Department of Justice confirming the new courthouse will be fully operational in 2018.

A spokesperson for the Courts Service confirmed the delivery date for the project is now mid-December and that the courts complex will open shortly after that.

“It will be in the spring of 2018 that we propose to begin the roll out of services there,” said a spokesperson.

The Limerick Leader understands that while some court sittings may take place at the new complex in January, it is unlikely to be fully operational until February or early March.

When fully operational, all criminal cases which are listed before the district court and circuit court will be held at the new complex.

The Central Criminal Court is also expected to sit there regularly to hear murder and rape trials.

It is undersood plans are being drawn up by Limerick City and County Council to convert the current courthouse and offices which are attached to City Hall  into a new council chamber before the next local elections in 2019.

While all criminal cases will be dealt with at the new courthouse, civil cases and some family law proceedings will continue to be heard at the County Courthouse, Merchant’s Quay.

Local Courts Service management have been planning the move (from Merchant’s Quay to Mulgrave Street) for some time and members of the judiciary are to be consulted as to the exact date that courts will begin sitting at the new complex.