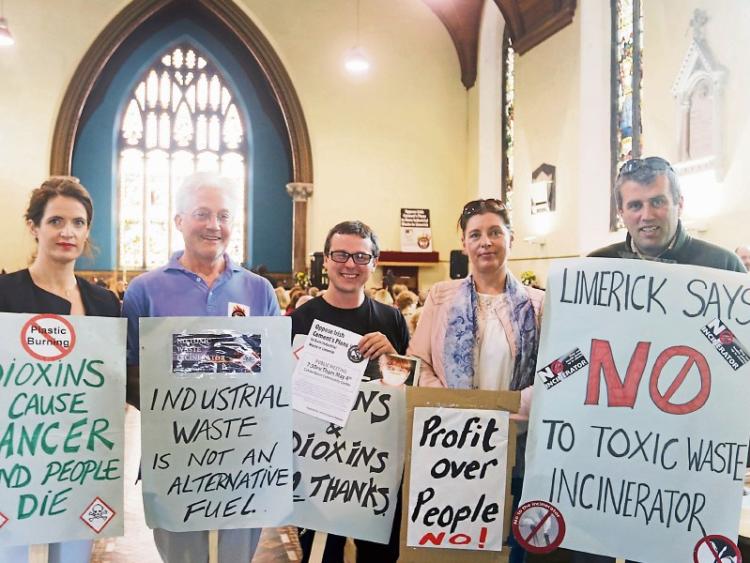 COUNCILLORS are to seek to change the local development plan to effectively block any developments similar to Irish Cement’s €10m reforms in Limerick.

In what have proven to be hugely controversial plans, the Mungret-based firm is seeking to swap the use of fossil fuels in favour of solid recovered waste and used tyres to produce cement.

The proposals have led to an An Bord Pleanala oral hearing, with locals concerned about the impact this will have on the environment.

For its part Irish Cement has always maintained that its reforms will not lead to any increase in emissions due to the fact the burning is taking place at close to 1,500 degrees.

If councillors get their way at a special meeting this Monday, they will change the county-wide development plan to “ban the development of incineration, gasification, fracking and other environmentally damaging and destructive industries in Limerick.”

While the reforms, if passed, are too late to impact on Irish Cement’s application, it will mean council planners will be able to throw out similar planning applications, citing contravention of the development plan.

One example of this is the rejection of proposals to extend out-of-town shopping centres, as they run contrary to local plans in place to prioritise retail in the city centre, with the Parkway Shopping Centre unable to expand as a result.

Solidarity councillor Cian Prendiville presented the motion to amend the development plan at this Monday’s economic committee meeting, and it was agreed to defer the matter to a special meeting.

“[The State’s] environmental policy is still very light touch. Sadly, the Mid-West is in the eye of this storm. We have Ireland’s three biggest polluters in this region- Aughinish, Moneypoint and Irish Cement. I do not think the council wants Limerick to become the incineration and pollution capital of Europe.

“This proposal is too late for Irish Cement – but it will at least stop any future similar developments. We need to make it clear that Limerick is not a place for destructive environmental activities,” he said.

However, this was described as “nonsense” by Fianna Fail councillor James Collins.

“This is a reserved function of the councillors. We set the policy for Limerick. That’s what we decide and vote on. If there is something in there which leads to circumstances we are not happy with, then we look to change it,” he said, claiming the council has presented this same legal argument nine or ten times.

Sinn Fein councillor Séighin Ó Ceallaigh said: “It’s just that, advice. It’s not something we need to follow. We are drawing down €170m for loans to build offices, but we do not ask who wants to have offices in a pollution zone. It’s bad planning.”

But Labour councillor Joe Leddin said: “The legal advice is black and white”.

He also warned that changing the development plan could hit other industries in the region.

"I have full faith in the democratic process, and I'm not going to close the door to any employer coming to the city,” he said.

Cllr Daniel Butler, Fine Gael, disagreed, saying: “A responsible environmental approach encourages businesses rather than deters it. Having this policy would be more conducive to attracting people rather than the opposite.”

But Ms Woods appeared to agree with Cllr Leddin’s assessment, saying: “If we put in a change, it could open the floodgates. We could end up banning a lot of other industries.”