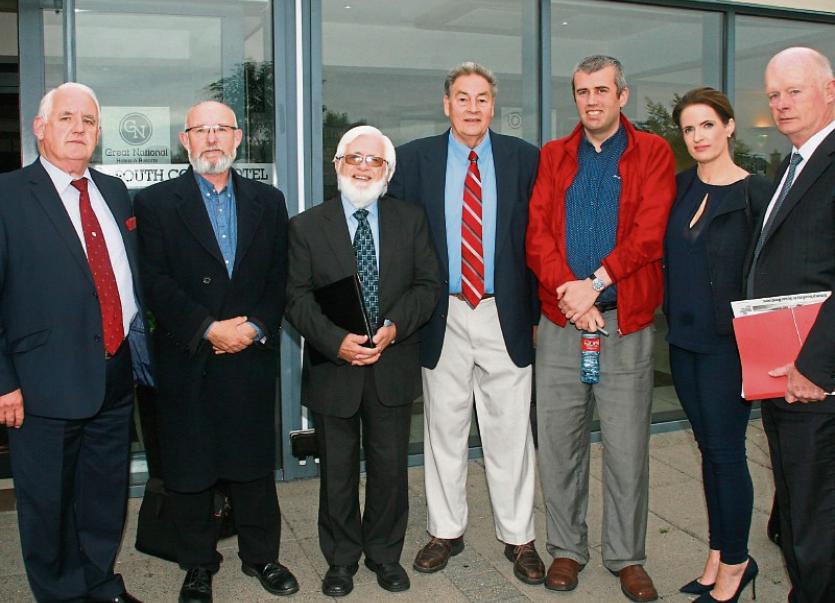 Limerick Against Pollution's Derek O'Dwyer, second from left, pictured at the start of the oral hearing into Irish Cement's €10m plans for Mungret

LIMERICK council planners gave the green light to Irish Cement’s €10m proposal – despite knowing the firm plans to burn up to 115 types of potentially hazardous materials in its kiln.

At the third day of the oral hearing, campaigners for Limerick Against Pollution (LAP), the group set up to examine Irish Cement’s plans, revealed a comprehensive list of materials the company could burn should it get the green light from both An Bord Pleanala and the Environmental Protection Agency (EPA).

The local authority gave the go-ahead to Irish Cement last March, and senior planner Stephane Duclot was questioned about this by LAP at the third day of the hearing.

Amid heated exchanges in conference room two at the South Court Hotel, Derek O’Dwyer, a retired engineer with LAP, called on An Bord Pleanala to “take a more robust view” when it decides on Irish Cement’s plans.

Mr Duclot said permission was given following talks with officials at the Southern Waste Management Office, who recommended strict conditions be imposed, including no unprocessed waste be allowed on site in Mungret, and all waste arrives ready to be burnt in the cement kiln.

Mr O’Dwyer said the list of materials made for “shocking reading”.

“I would suggest it may help when An Bord Pleanala revists this case, it takes a more robust view of the 115 hazardous materials which are being proposed to be burnt in the cement kiln,” he added, to applause from the audience.

LAP members also asked Mr Duclot, and his colleague Dermot Flanagan whether Irish Cement’s plans fell in line with the Limerick 2030 plan, which is envisaging a reimaging of the city, plus the ongoing redevelopment of the Mungret area.

Mr Duclot said: “My job is to assess planning applications in line with the city and county development plan, its zoning and any other existing oversight. We focus on planning and not the operation of the plant. That is a matter for the Environmental Protection Agency (EPA)”.

Mr Flanagan added: “I believe a balance has to be struck, and that balance was arrived at by the planning authority in its judgement.”

Fianna Fail councillor James Collins spoke for the second time at the oral hearing to reveal that councillors were setting in train plans to ban all incineration of toxic waste in Limerick.

Their proposals, to be debated at the next economic strategic policy committee meeting, are unlikely to influence Irish Cement’s plans, as its application will be guided by the existing local development blueprint.

At the end of the day’s hearing, Mr O’Dwyer was again sharply critical of Limerick City and County Council’s planning staff, saying: “I would note a sequence of questions we have asked have elicited broadly the same response from the planners. I find that very disconcerting. It is reasonable for us as citizens to expect transparency in our decision making. I would again urge An Bord Pleanala’s inspector to take a much more robust view of this application than Limerick City and County Council appears to have done.”

The oral hearing, before inspector Michael Dillon, continues into its fourth day from 10am.