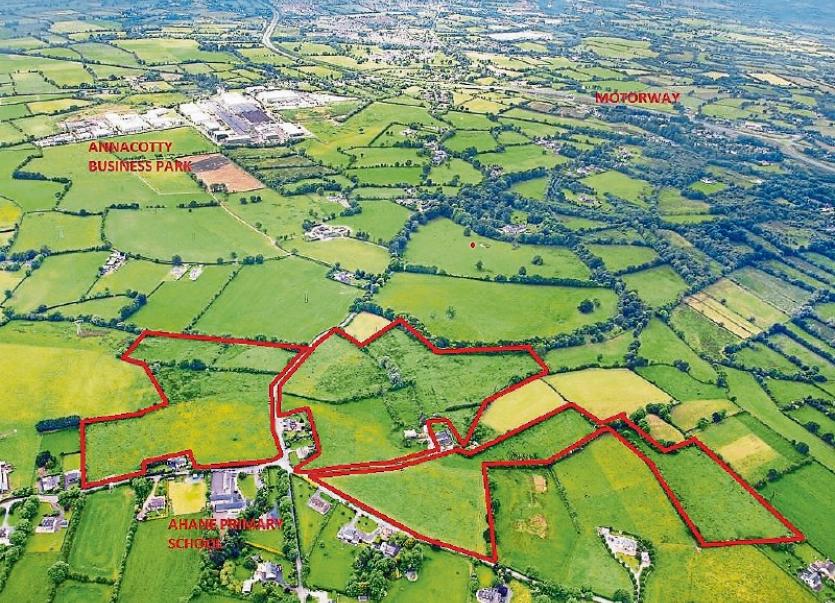 Forty-eight acres at Laught, Lisnagry will go for auction on September 21

FOR THE first time since the crash farmers may not be the only bidders in the room at an upcoming auction in Limerick.

Builders could be tempted to the Kilmurry Lodge on September 21 at 3pm for the sale of 48 acres at Laught, Lisnagry.

Tom Crosse, GVM property director, said there is potential for building given “its popular location and its proximity to Ahane”.

“It is near Ahane church and school and there is a lot of road frontage. Sites would be very much sought after in that location. There is a lot of valuable housing in the locality and it is a very attractive place to live. You are very near the motorway, UL, National Technological Park, Annacotty Business Park and excellent access to the city. It is a really hot location,” said Mr Crosse.

Indeed, the nearby village of Castleconnell and the whole parish is back “en vogue” said the auctioneer. Last week, GVM sold a three bedroom semi-detached housing estate in Castlerock housing estate for around €220,000. In late 2014 / early 2015 a neighbouring house was bought for €120,000.

The 48 acres in Laught is being sold by the representatives of the late James Richardson. It is divided into lots - 1. farmhouse, in need of repair, together with out offices and circa 19 acres. 2. Thirteen acres. 3. Sixteen acres with frontage to two roads. 4. Half an acre of raised bog at Annaholty, Birdhill.

Since the crash the only people Mr Crosse has seen at auctions have been farmers but this is an interesting barometer of the economic recovery.

“The sale is likely to attract interest outside of the farming community due to possible site potential and extensive road frontage. The land is excellent.

“Of course, you will have farming interest as well. It was a beef farm but there are dairy farmers in the area. I would expect normal agricultural value per acre to be exceeded in this instance. A lot will depend on who comes in for it,” said Mr Crosse.

In last week’s Limerick Leader one of the newest residents of the area – Jean Marié Stander described why she and CJ decided to buy a property there.

“Finally after two years of searching we found a house we could see ourselves living in, and the rest is history,” said Jean Marié, who added that she and CJ both love the feeling of being “close to the countryside but also so close to UL where CJ needs to be every day”.

Indeed, Castlerock – the estate mentioned at the start of the piece – could also be expanding. It originally comprised 32.25 acres in total and had planning for 248 units, 147 of which are sold and occupied.

The built part of the estate is taken in charge by Limerick City and County Council. REA O'Connor Murphy are offering for sale the remainder of the site – 18.7 acres - in four zones.