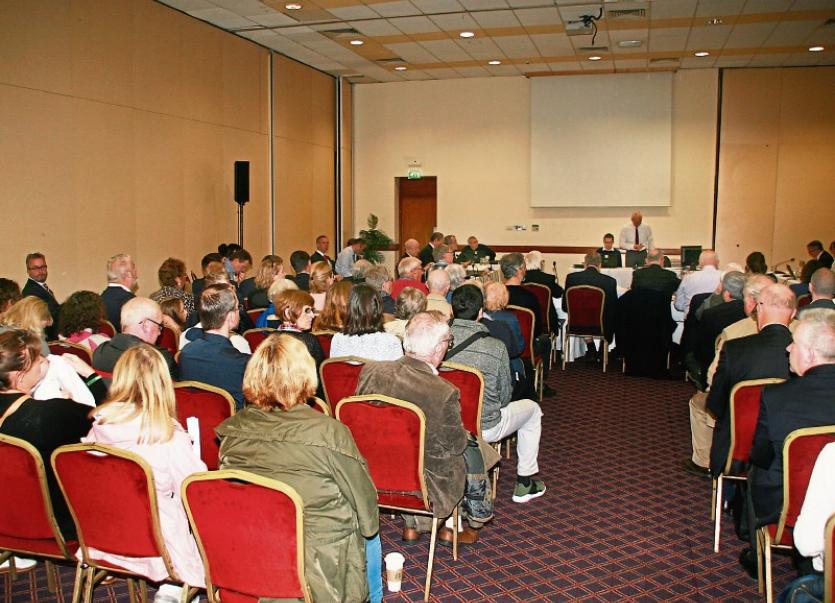 COUNSEL for Irish Cement say results from air sampling of dioxins and furans near the firm’s factory in Mungret are “below the level of detection”.

At the third day of the An Bord Pleanala oral hearing into the firm’s €10m plans to switch process at its factory, Jarlath Fitzsimons, who is leading its legal team, presented a series of figures showing the results of tests on air made outside the plant.

At the South Court Hotel, he presented figures showing a series of tests showing the background concentration of a levels series of gases including nitrogen dioxide, sulphur dioxide, mercury and thalium over different time periods.

The measurements, Dr Mary White, added, were taken at a point to the south-east of the plant, near the N69 road.

The company presented five soil samples, which saw there was an average of just 0.711 nanograms of dioxin present, compared to an average of 2 nanograms in Britain and Northern Ireland.

Dr Martin Hogan, for Irish Cement, said: “The soil sample came back as having very low dioxin levels compared to the UK. I think that should be very reassuring to the inspector and the local population at large.”

The figures were presented following a presentation by Dr Gordon Reid, appearing for Limerick Against Pollution (LAP), who was sharply critical of the data Irish Cement had provided.

He followed in the footsteps of another LAP witness, Dr Paul Connett, in questioning the methodology the firm had come up with, saying its information is based on a “perfectly clean” world.

“What they are doing is to tell us what effect it will have on people’s intake of dioxins. Without taking into account there’s a lot of them in the environment already. It’s perfectly conceivable if there is a lot of this already around, the extra the factory produces will take us over the limit of what is allowed,” he said.

Irish Cement has argued that its plans to switch away from fossil fuels in favour of solid recovered waste and used tyres provides a lower-carbon alternative.

But Dr Reid says he is skeptical of this.

“What Irish Cement is trying to tell us is the alternative fuel its planning to burn would not increase emissions. But it depends on the waste. Some substances would have a lot of CO2. They could throw everything in the kiln,” he said.

Dr Reid claimed some of the data provided by the company was “absolutely meaningless”, and that information relating to the “tolerable daily intake of dioxins, furans and dioxin like polychlorinated biphenyls (PCBs)…falls short of the information requested, and is inadequate”.

Irish Cement defended the analysis, and said it had adhered to and was bound by legislative conditions.

Dr Reid, a retired senior lecturer in physiology at University College Cork, added his voice to calls for Irish Cement to provide more detailed data in the dioxin levels in separate items in the food chain.

Up to now, the firm has only provided a global figure, arguing the methodology it uses is approved by the Environmental Protection Agency – and pointing out this information is all it has been asked to provide.

“I would appeal to the applicant to release all the information they have got on the estimates for PCP intake for the citizens and most importantly of all, the inspector,” he said.

“You cannot trust a model which is not giving the inner workings. There are things you can test very well like the dioxin contents in milk. The EPA measures this all the time. The model must calculate that,” he said.

The oral hearing, before inspector Michael Dillon, will continue into a fourth day this Friday.