Jobs boost for Limerick as firms commit to the West 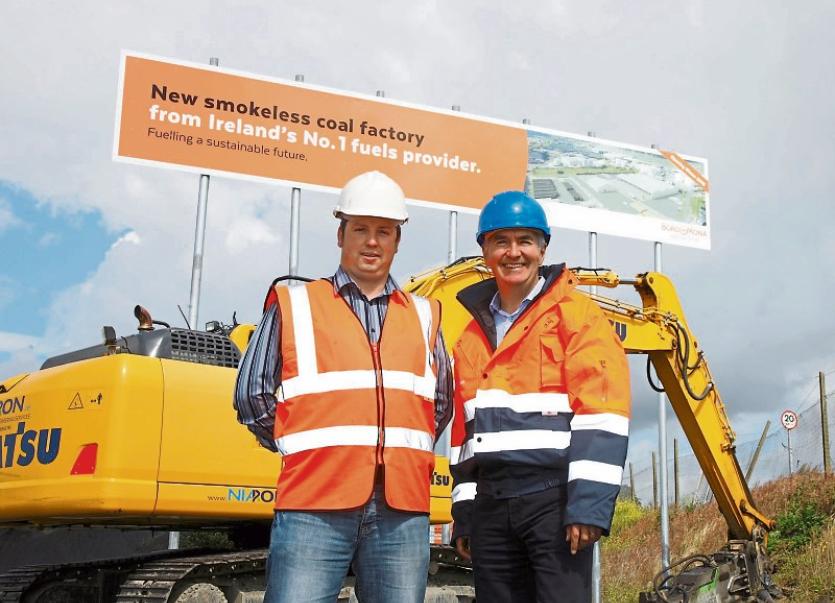 A NEW €20m Bord na Móna facility in Foynes will be the company’s only smokeless coal plant in the country – and will provide over 100 jobs in the construction and operational phases.

This is not including the dozens of additional jobs which could be created indirectly, through “stevedoring, material handling and local haulage”, according to Bord na Móna.

Site preparation works kicked off this week for the plant, which will become the main source of Bord na Móna fuel as the country transitions to smokeless.

A total ban on natural, bituminous coal is due to be introduced by the Government over the next two to three years.

“We are assuming when the ban is enforced, 95 percent of people will move to using an alternative solid fuel, which will ultimately be smokeless fuel,” said Geraldine Lynch, head of supply chain for fuels at Bord na Móna.

When fully operational, the plant will produce up to 150,000 tonnes of smokeless coal.

“From Bord na Móna’s perspective, at the plant down in Foynes, we will be using that to supply all of our customer base throughout Ireland,” she said.

“That will be the only manufacturing plant. At the moment, we have a number of importation yards, where we are importing bituminous coal. Now we will only be manufacturing the smokeless coal once the ban is in place, and the only place we will be doing it is at Foynes,” added Ms Lynch.

The project will generate 80 jobs during the construction phase. The facility itself will generate 25 jobs when it becomes operational. There will also be indirect employment created as a result of the plant operations in Foynes.

“This is quite substantial in terms of jobs for Bord na Móna, and it’s genuinely very exciting for the team,” said Ms Lynch, who added that Shannon Foynes Port Company’s presence in the village is a huge pull for the fuels company.

Meanwhile, Minister of State for Finance and Public Reform, Patrick O’Donovan stressed the importance of small and start-up businesses to the rural economy. He was speaking ahead of the official opening of a new gym in Newcastle West which employs ten people on a full or part-time basis.

The gym, located in the Newcastle West Business Park, is owned by fitness and health lecturer and practitioner, Maeve Frawley and opened its doors last January.

Friday’s official opening, Minister O’Donovan said, was intended as a gee-up and to raise awareness.

“From what I gather, they wanted to test the waters, and they are going well, the response has been positive.

“It is typical of what we have since over the last few years where start-up businesses start very small, particularly start-ups in provincial towns,” Minister O’Donovan continued. And he had words of praise and encouragement for those who, after the recession, took the risk to invest money and start their own businesses.

“That is where the value will come. The rural economy relies hugely on the small and medium enterprises. Five or six jobs in Newcastle West is the equivalent to 100 in Dublin. Just the scale is different.”

Hopefully, he added, the Arena Gym figures would grow into double figures.