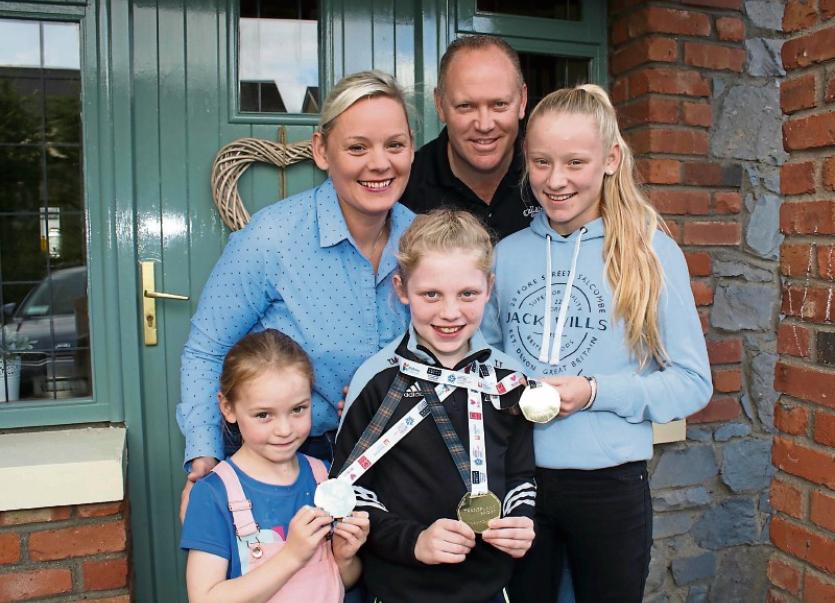 TARA Madigan won three gold medals at the British Transplant Games and she was cheered on by two families – her own and her donor’s.

The 10-year-old from Castleconnell received a life saving deceased donor liver transplant at King’s College Hospital in London in 2012.

And while Tara won her first gold in the 3km mini-marathon her dad, Sean, said the family had an even more important event that night.

“We had dinner for the first time with Tara’s donor’s family. This doesn't happen often but after exchanging several letters over the years since the transplant, Gary and Caroline asked would it be OK to come and cheer her on in Glasgow. They drove eight hours from London to meet Tara," he explained.

“Their gift five years ago was making all this possible and they were so delighted to be able to share in what their daughter’s gift to our daughter was enabling Tara to do. Tara was living life as fully as she could. We had a great evening with them,” said Sean, who is married to Anne and they have two more girls Érin and Éle.

The next day Tara triumphed in the 50 metre sprint after vowing to better her third place finish from last year.

And her third goal came in the long jump – backing up her success last year with a leap of 3.52 metres. It is a sporting feat befitting her legendary great-grandfather - the great Mick Mackey.

“What a great day and it was lovely to have been able to share it with Gary and Caroline. We all went to the closing ceremony and to our surprise the organisers wanted Tara. She had won an award for the most successful participant in her age group. What a way to end our trip,” said Sean.

He said what Tara is achieving in life is down to the “amazing generosity” of their friends, Gary and Caroline.

“Organ donation can be a very positive decision both for the recipient and the donating family / person. Please carry a donor card and make your decision to be a donor known to your next of kin. This simple conversation can save lives” said Sean.

During the athletics, he spoke with honorary Irish team captain Harry Ward.

“We were saying that the ability of both children and adults post-transplant should give real hope to any patients facing a potential transplant. If the games could get more exposure, more people could see that despite having a transplant, which is a very serious operation, life afterwards can be very, very normal. It should also highlight to potential donors the great good that can come from being an organ donor,” said Sean.

For organ donor cards freetext DONOR to 50050 or visit www.ika.ie/card