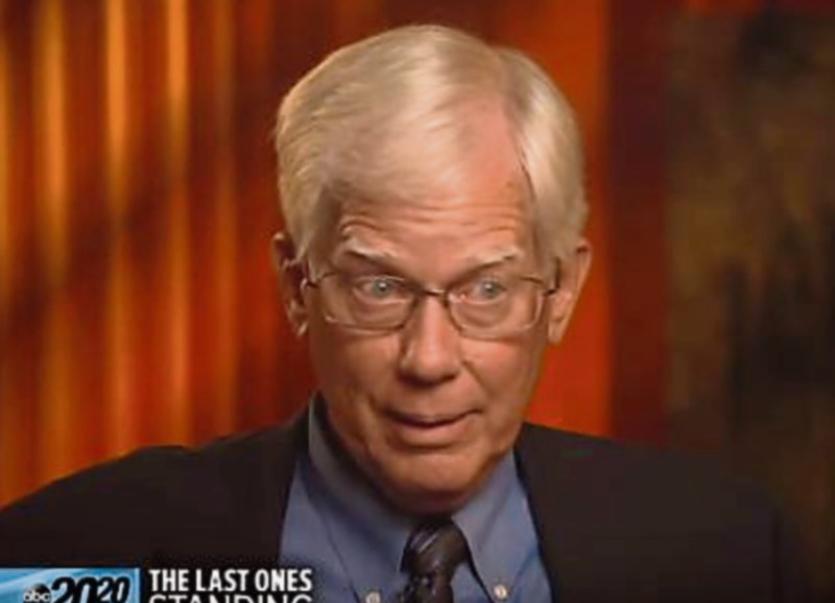 Convicted murderer Thomas Martens, 67, a former FBI agent, during the televised interview, recorded before their conviction

“MOLLY and Tom make for a rare pair of murder defendants,” outlined the voice-over in opening scenes of a televised interview with convicted murderers Molly Martens Corbett and her father Thomas.

The exclusive interview, which aired on Friday night, was recorded before Martens Corbett, 33, and Martens, 67, were convicted by a jury of the second degree murder of Mr Corbett, a 39 year-old father of two.

The pair were sentenced to 20 to 25 years in prison for the Limerickman’s murder.

Martens Corbett had never broken the law, while her father had made a career as an FBI agent for over 30 years, it outlined, before leading up to the horrific night of Corbett’s death on Sunday, August 2, 2015.

Neighbour Tony Turner described Mr Corbett as “very cordial” and “someone who was loved by everyone. He was a gentle Irish giant.”

He said he could see no signs of any trouble in the relationship between Mr Corbett and his now convicted second wife.

While she refused to testify during the lengthy trial, Martens Corbett again claimed that she was subjected to physical and emotional abuse at the hands of her husband, and predominantly stayed with him because of the two children from his first marriage, Jack and Sarah.

“I never would have left the children,” she told the interviewer, during the 11-minute segment.

At first, when they moved to North Carolina from Limerick she said it was “like a wonderland” until Mr Corbett became “very controlling, possessive and paranoid.”

Addressing the early hours of August 2, 2015, her father said: “It’s horrible – a man died, but a man also attacked my daughter, and a man tried to protect his daughter.”

“On the wedding day I was excited for them. It was a delightful experience and a beautiful wedding,” he said.

No evidence was produced during the trial to support allegations of abuse, and Martens himself told the trial he did not witness any physical violence between Mr Corbett and his daughter prior to an altercation which he claimed had occurred on the night he was murdered.

She had sought to adopt the children, but Mr Corbett refused. After his death in August 2015 she had sought and was refused custody of the two children. Guardianship was awarded to the children’s aunt, Tracey Lynch, and her husband, David.