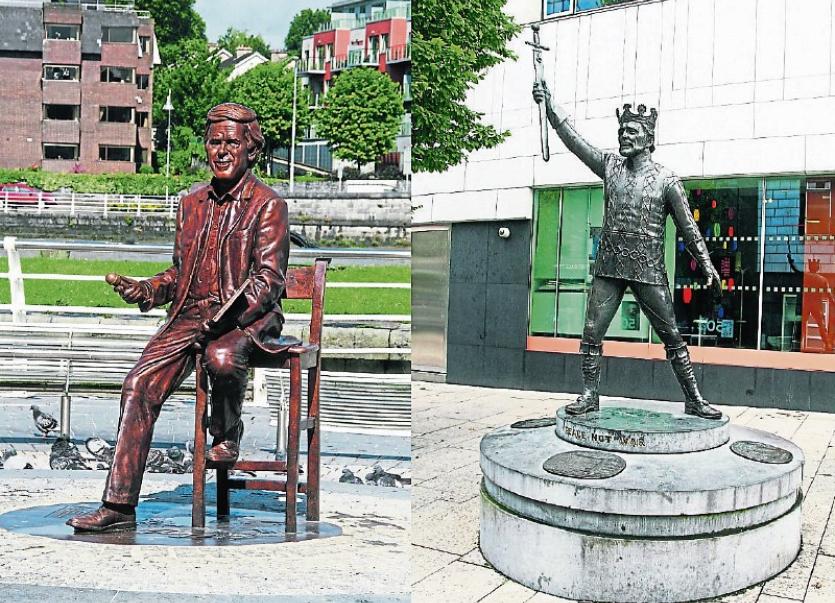 Statues of Sir Terry Wogan and Richard Harris have left a sour taste in the mouth of Cllr Gilligan, in particular, who wants them melted and resculpted Pictures: Adrian Butler

STATUES of Terry Wogan and Richard Harris in Limerick city should be “melted” down and reconstructed, a former Mayor of Limerick has urged.

Independent councillor John Gilligan said both bronze pieces, and costing some €200,000 between them, are “dreadful” and “a joke”.

“They simply aren’t up to scratch. If you’re going to erect a statue to someone it should at least have some resemblance. The one of Terry Wogan is, at best, a cartoon character – best viewed from about two miles away.

“I think we have to accept that we tried it, it didn’t work out, let’s go back and fix it. It’s going to last a long time.

“In 100 years’ time it will still be wrong, and they’ll be even more unrecognisable. The biggest problem we have in Government, both local and national, is that nobody is prepared to say ‘We got it wrong, but we’ll fix it’.

Fianna Fail deputy Willie O’Dea told the Limerick Leader that he is not opposed to the idea.

“Obviously a lot of money has been spent, and I don't like to see waste of public money, but they have upset a lot of people.

“Every time I pass the Terry Wogan statue, and I walk down there every day, I try to avoid looking at it because it annoys me. It really is annoying.

Deputy O’Dea said he “wouldn't be totally hostile to the proposal” of replacing the statues with new models.

The piece in memory of Sir Terry Wogan, the legendary BBC broadcaster, by the award-winning artist Rory Breslin, from Mayo, was commissioned by Limerick City and County Council for in the region of €50,000.

It was selected from some 30 submissions by artists nationwide, though the shortlisted designs were not shown to the public, nor put out for a period of public consultation.

The statue of the twice Oscar-nominated actor and Limerick’s most famous thespian, Richard Harris, on Bedford Row continues to draw criticism, some 10 years on since its unveiling.

But the metropolitan mayor of Limerick, Cllr Sean Lynch, said he is not in favour of the proposal, as the money could be put to better uses.

“I’m not in favour of going to further expense to change it now. The Wogan piece is in a great location, and still catches the eye.

“They definitely got it wrong with the Harris statue, as it doesn’t look like him at all. Harris is certainly more questionable than Wogan; that statue is definitely open for debate,” he conceded.

Acclaimed artist John Shinnors, of the RHA, has also been vocal in his criticism of both pieces.

Mr Shinnors lamented that the statue erected in memory of Wogan is a “Brexit tourist attraction, lacking in imagination.”

“It’s a caricature. A Brexit tourist attraction, has nothing to do with its surroundings and is lacking in imagination,” he said.

Mr Shinnors, 67, said many of these visions for public art pieces are conceived by council officials and politicians “who wouldn’t know a Turner from a turnip”.

“Where was the thought of the quality of the piece, the most suitable location or how it could enhance an area,” he questioned.

He said the sculpture of Harris is “touristy kitsch”.