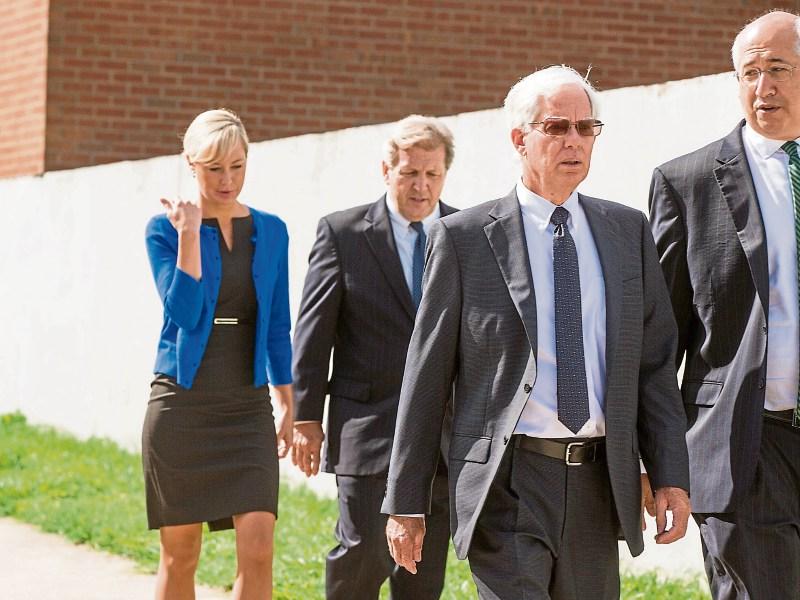 LIMERICKMAN Jason Corbett was hit with a 17-ounce, aluminium baseball bat and a paving brick at least 10 times the morning he died, his murder trial in North Carolina has heard.

Molly Martens Corbett, 33, and his father-in-law, Thomas Martens, 67, have pleaded not guilty to the second-degree murder of Mr Corbett in the early hours of August 2, 2015, at the couple’s home in Wallburg, North Carolina.

Both accused are claiming self-defence.

Mr Corbett, a 39-year-old father of two, was found beaten to death inside his home where he lived with Ms Martens and his two children from his first marriage.

The opening statements in the trial heard that a post-mortem examination revealed traces in Mr Corbett’s blood of a powerful sleeping pill, which was prescribed for his wife just days earlier.

The jury of nine women and three men at the Davidson County courthouse in Lexington, North Carolina, heard that Mr Corbett did not suffer from the sleep issues for which the drug was prescribed.

His wife got a prescription for Trazodone on July 30, just three days before Mr Corbett's death.

The court heard that the damage to Mr Corbett's skull was so severe that a post-mortem couldn't determine precisely how many times he had been hit.

Prosecutor Alan Martin said that while the couple married in 2011, Ms Martens Corbett remained only a step-mother to Mr Corbett's two children by his late first wife – and her husband was apparently considering moving back to Ireland.

Mr Corbett was found in the bedroom naked and blood-spattered with a crushed skull, but there wasn’t a mark on either his wife or his father-in-law when police and paramedics arrived.

“Thomas Martens [had] no injuries, no bruises, no swelling, no cuts and no blood appeared to come from him,” he said.

Mr Martin told the court that during the post-mortem, a pathologist moved his scalp and “pieces of his skull fell out onto the table”.

The only mark on Ms Martens Corbett at the scene was a little redness on her neck.

Both accused refused emergency medical treatment at the scene.

Mr Corbett’s blood was found all over the bedroom floor and walls, as well as in the hallway and bathroom.

Blood spatters indicate that Mr Corbett was subjected to a sustained series of blows.

At least one blow was determined to be postmortem, according to Mr Martin.

“Why didn’t they stop?” he asked the jury.

David Freedman, for the defence, said Mr Martens woke that day and suggested to his wife, Sharon, they take a drive to see their daughter and her family in Wallburg, North Carolina.

They went and Mr Martens brought with him a 17-ounce, aluminium baseball bat to give to Mr Corbett’s son, Jack, as a present. He indicated Mr Martens’ son had played college baseball.

Ms Martens drove her husband to pick Jack up at a birthday party, and by the time they arrived home, he decided it was too late to give him the bat.

Sharon and Tom Martens went to bed in the basement of the Corbett home.

At 3am, Mr Freedman said, Mr Martens heard someone scream and ran upstairs, knowing his daughter and grandchildren were at the top of the stairs.

Grabbing the “little league” baseball bat, Mr Freedman said, Mr Martens approached the scene not knowing what was going on.

“The last thing he thought he’d ever see,” Mr Freedman said. “All he sees is his little girl with her husband’s hands around her neck.”

“I am going to kill her,” Mr Freedman said Mr Corbett replied.

At this point, Mr Freedman said Mr Martens used a baseball bat he had brought from Tennessee for his grandson.

Opening witness Karen Capps, of the Davidson County Emergency Call Centre, confirmed she took a 911 call from Mr Martens at 3.02am on August 2.

Mr Martens was said to be “surprisingly calm” during the phone-call.

“He stayed calm throughout the call. He said he hit him [Mr Corbett] in the head with a ball bat.”

Jurors have been presented with a representation of what the crime scene appeared to be like when a police detective arrived at the house.

Inside the bedroom from the foyer where he was standing, the detective said he witnessed “the naked, dead, bloody body of Jason Corbett”.

Mr Martin has indicated that the trial will involve an element of alleged domestic violence.

It will also include testimony from a number of specialist witnesses including forensic experts.

Two of Mr Martens three sons will be offering defence evidence in the trial.

Mr Corbett’s first wife, Margaret ‘Mags’ Fitzpatrick, died from an asthma attack in 2006 when their two children were aged under three years.

Mr Corbett then met Ms Martens, a native of Tennessee, when she replied to his advert for an au pair to help him look after his young children.

A relationship developed between them and the couple married in 2011. They relocated to North Carolina the following year.

Judge Lee has indicated that the trial will last for more than three weeks.