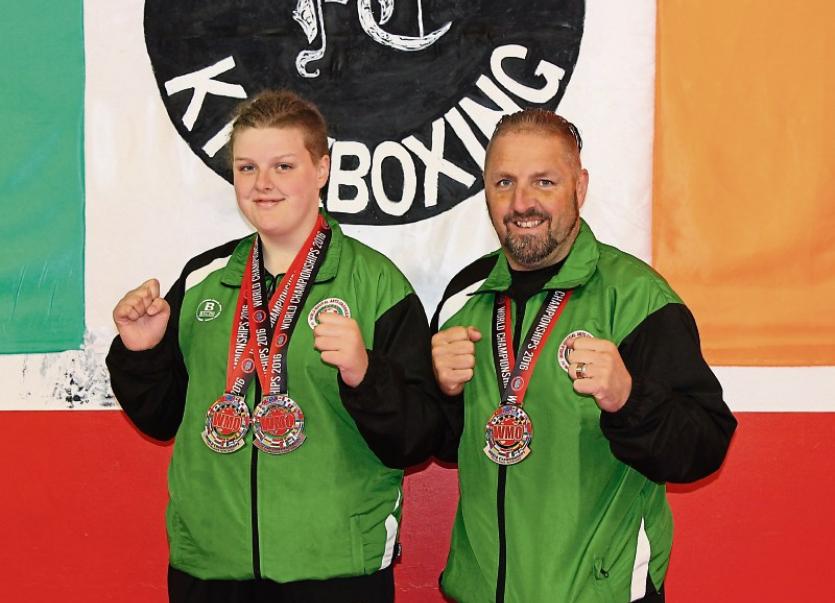 Kori Goad, world champ at 14 pictured with her dad Damian at a previous competition

A LIMERICK teenager is making headlines in the tough world of boxing and kick-boxing.

Fourteen-year-old Kori Goad from Tournafulla, who has yet to sit her Junior Cert, returned home recently with two gold belts, having taken world firsts in boxing and kick-boxing at the World Federation of elite Martial Arts (WFMA) world games in Rome.

The two golds will sit nicely beside her three silver medals from previous championships and of course alongside her dad, Damien’s, three silver and three bronze world titles.

Damien, who is also Kori’s coach and introduced her to the sport six years ago, said: “She has done something super. I am over the moon. I just could not be more pleased.”

Her wins, he added, were all the more significant in that she had to compete against 19-year-olds from a senior category to secure gold.

The young athlete got a champion’s welcome when she touched down in Kerry Airport before travelling on to her club Fisticuffs in Abbeyfeale and heading for home in Tournafulla.  She was feeling good about her victory, she told the Limerick Leader.

“It was brilliant to win,” she added. “I was surprised how well I did as it was senior against junior.”

But she also enjoyed the post-competition fun.

“It was good craic,” said the Coláiste Ide agus Iosef student who is now well-rested after her bouts.

“I like both,” comes the reply when asked which is her favourite. “I am not 100% sure which one is my favourite yet.”

But she is certain about one thing. “I am planning on going professional.”

Meanwhile, of course, she has her Junior Cert to sit next June. And already, she is thinking ahead to her next competition.