Munition discovered by workers carrying out maintenance to bridge 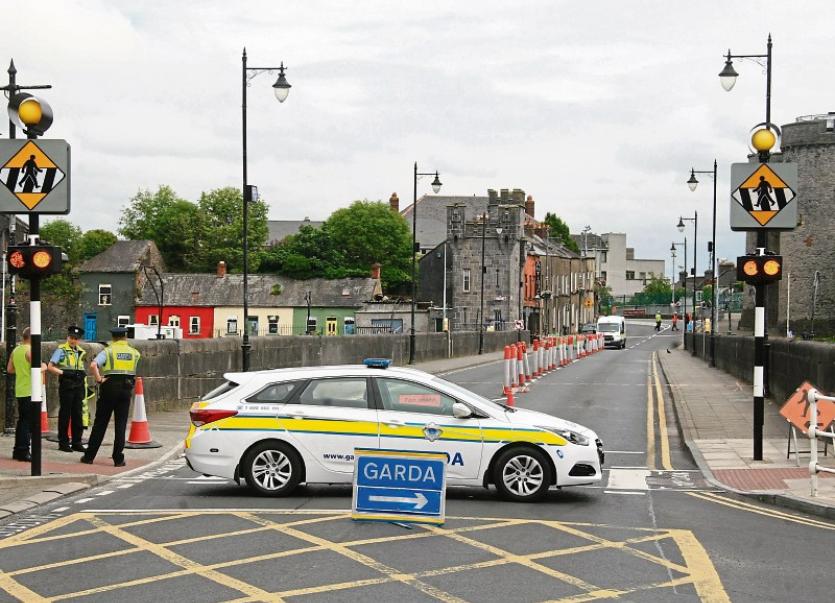 Gardai at the scene on Thomond Bridge, below which a historic hand grenade was found Picture: Adrian Butler

THE Army Bomb Disposal team have made safe a historic hand grenade found underneath Thomond Bridge in Limerick.

The Defence Forces have confirmed this Wednesday night that a Mills 36 hand grenade – typically used throughout the War of Independence and World War Two – was moved to a safe location and disposed of after the alarm was raised earlier today.

The grenade was discovered by workers as they carried out maintenance work on the bridge and, following a request by gardai, the Army Bomb Disposal Team arrived on scene at 3.30pm, where they carried out an initial assessment of the area.

A cordon was put in place for the duration of the operation to ensure public safety. Due to the location of the grenade the assistance of the Limerick Marine Search and Rescue Service was required.

After the grenade was subsequently being moved to a safe location and disposed of, the scene was declared safe at 8pm.

An army spokesperson said: “Historic munitions from conflicts in the early 20th century can be encountered from time to time. Should members of the public find such munitions they are advised to maintain a safe distance, inform An Garda Síochána, who in turn will request Defence Forces assistance.”

The grenades, the army said, were regularly used throughout the War of Independence and World War Two. They were patented and developed by the British Army in 1915 and continued to be manufactured up until the 1980s.

The bridge was closed to traffic during the incident, but has since reopened.