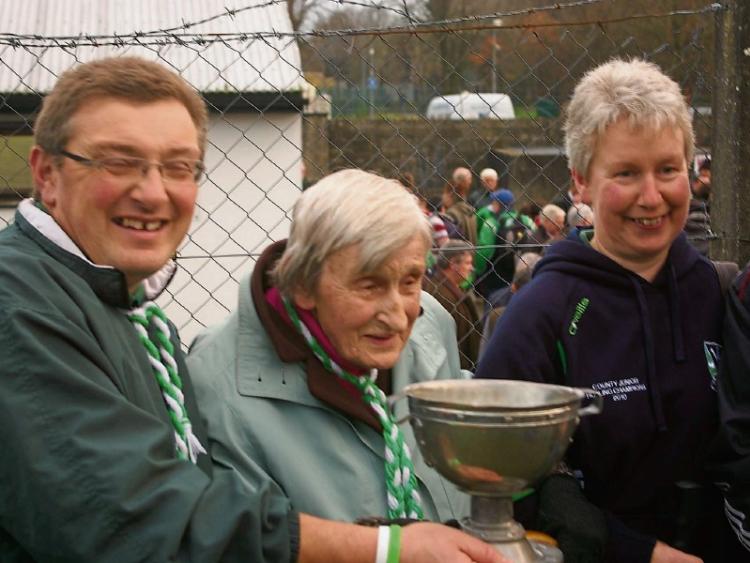 Mary Rea, who won’t be able to watch the Limerick hurlers on Saturday as it is on Sky, with son Mike, his wife Mary, after Effin’s Munster intermediate club win

FOR the third championship match in a row a 91-year-old grandmother, who has followed the Limerick hurlers all her life, won’t be able to see them on TV.

In her prime, Mary Rea, Effin, even cycled to Thurles to cheer on the boys in green but as she doesn’t have Sky Sports she will miss out on Saturday night. Neither Limerick’s loss to Clare in 2016 or 2017 were on terrestrial TV and the upcoming clash with Kilkenny is also on the British channel.

Mary’s son, Mike says there are many, particularly the elderly, who will miss out again. He feels so strongly that he has stopped going to inter county games.

“The last match I was at was the All-Ireland semi-final against Clare. I don’t see why I should financially support the GAA if they are prepared to discriminate against people in that manner,” said Mike.

He says his mum will be a disappointed lady on Saturday night.

“She doesn’t have Sky, she has RTE One, RTE 2, TV3 and TG4. She is not as mobile as she was. It was always a big thing for her to watch the matches on the telly. It wouldn’t matter if it wasn’t Limerick - she likes to watch the matches. She loves the GAA,” said Mike, who was juvenile county secretary for five years and involved with Bord na nOg for seven years.

In Mary’s youth she lined out for Charleville and Avondhu camogie teams and pedalled her bike to Semple Stadium in 1944 to watch Limerick and Cork in the Munster final. The country was ravaged by war-time petrol restrictions,

“She tells a story about that famous match against Cork. We were well up on Cork when Christy Ring rammed in a goal at the very end. In the height of it and the excitement of it when she thought Limerick were about to pip Cork she fired her cardigan into the air, and it was a new cardigan, but it never came back!” said Mike.

Not being able to watch Limerick on Saturday night is a “slap in the face” for loyal supporters like his mum and many others, he says.

“It is very expensive for nursing homes and respite centres to get Sky Sports in too. The last Limerick game my mum saw was the National League semi-final against Galway because it was on TG4.

“To my mind the GAA has changed totally from what it started out as. It is no longer an organisation for the people. I feel that it has lost touch totally with its roots. It is now a a big corporate money making racket. I feel strongly that games should be available to as big an audience as possible. I don’t see why the elderly should have to be excluded from it,” said Mike.

According to the GAA website, this year is Sky Sports “biggest and most comprehensive season of GAA coverage yet” with 14 exclusive fixtures

“I know it is 2017 and organisations have to evolve but at the same time you can’t leave people behind either. From my own point of view, I felt it was one thing to be complaining about this on Facebook,Twitter or in the media but it is easy enough to take action. So I haven’t gone to any inter county fixtures since they started it. I refuse to financially subscribe to them while they are continuing this,” said Mike.

However, the match being on Sky may have the opposite affect on others. Limerick County Board secretary, Mike O’Riordan tweeted this Wednesday: “Huge demand for Limerick v Kilkenny stand tickets for next Saturday evening. Get your match tickets from Centra, Super Valu stores, online or the county board office.”