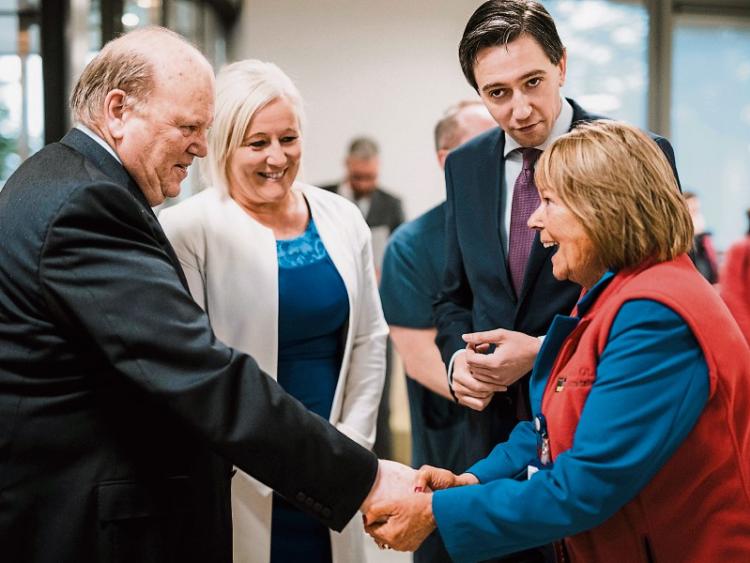 MEDICAL experts from across the globe will visit Limerick in the coming weeks to gain valuable insights into the new €24m emergency department, a top consultant has said.

Speaking at the ministerial launch, emergency consultant Dr Fergal Cummins told a packed audience of staff, politicians and patrons, that interested experts from Abu Dhabi, Toronto and Sydney will visit UHL over the next six weeks.

Dr Cummins said that their particular focus will be on the “world first” resuscitation simulation room, which features a CAT scan. This unique and exclusive feature will mean seriously-ill patients can receive scans and be resuscitated in the same room, largely reducing patient movement within A&E.

He aded that “there is nowhere in the world that has this, but over the next few months, everybody will want one of these”.

Before recruitment, there were 119 staff in the old ED. Now, there are 207, with five emergency consultants and four registrars expected to be appointed by 2018.

UL Hospitals chief executive, Prof Colette Cowan said that despite the cynicism surrounding the recruitment campaign, it was a “tremendous success”.

At a later press conference, Dr Cummins said that the issue of overcrowding will not go away until the capacity problem is sorted.

This is why the UL Hospitals Group has sought funding from the HSE to construct a new 96-bed block in Dooradoyle.

Though the €1m design process is close to commencement, Minister Simon Harris has given no clear idea of when the Government will invest in the construction of the project, estimated at €25m.

During the launch, Dr Cummins turned to both Ministers, and said that they should look to Limerick for future medical projects.

“Unfortunately, we are still going to have trolleys. And this is where I say to both Ministers that, we know we have solutions. Yes, there is some capital cost, but knowing that this team brought this project on time and on budget, exactly as per plan five years ago, I would suggest that both Ministers that it is a time to look to Limerick for when you need a pilot project.”

Prof Cowan said that the ED will be a “huge advancement for unscheduled care”.

“The new environment will also allow us to introduce new ways of working and the latest thinking on patient flow has been integrated into every joint and contour of this department. Our ED consultants have adopted concepts from industry from all over the world and brought that thinking back to Limerick for the benefit of our patients, to make their journey through the ED as smooth as possible and their experience as pleasant as possible.”

She commended the outgoing Finance Minister for his continuous support for UHL’s many projects.

And turning to the political stalwart, she quipped: “Nobody here would greatly object if you wanted to sign the cheque for a 96-bed block,” prompting a roar of laughter from those in the crowd.

Minister Noonan said that his first experience with the Dooradoyle A&E was in 1957, when he fractured his wrist after a bike fall on his way to school in Glin. He said that, since the opening of the hospital in 1955, the complex has seen major developments, adding that it was “very easy” for him to get involved, as Health Minister and Finance Minister.

Agreeing with Minister Noonan that “more needs to be done” at UHL, Minister Harris acknowledged that there is a “deficit of beds in the hospital”. Though unclear about the 96-bed block, he said that the co-location of University Maternity Hospital Limerick was high on his agenda for the next round of capital funding.

Minister Harris admitted that he was “genuinely shook” when he visited the old emergency department in October 2016, but added that launching the new facility was “one of the happiest days”.

Special features in the department include separate triage facilities for paediatrics, adults, minor, and major injuries; and segregated resuscitation cubicles. Some €4m was spent on 2,780 pieces of equipment during the ED fit-out.