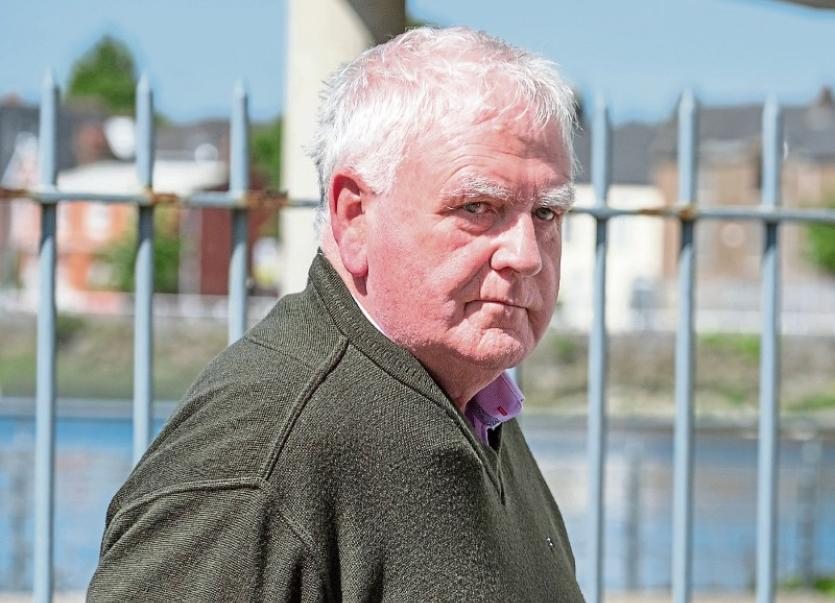 Ted O'Donoghue appearing at Limerick District Court this Saturday, where he was granted bail Picture: Press 22

A MAN accused of injuring his neighbour with a legally held shotgun and killing his dog in County Limerick has been granted bail.

The long running dispute is over the use of a “right of way” to farm lands in Kildimo.

Ted O’Donoghue, 72, with an address at Kilmoreen, Kildimo, appeared at Limerick District Court this Saturday morning, charged with assaulting John Hayes, causing him harm under Section Three of the Non-Fatal Offences Against The Person Act.

At a special court sitting, Judge Marie Keane was told the defendant made no reply when he was cautioned.

Mr O’Donoghue was arrested in Barnakyle, Patrickswell at 1.10pm on Friday after the incident and charged on Friday night at Newcastle West garda station.

Opposing a bail application, Gardai said it would be alleged the serious offence was connected to a long standing dispute over land.

It is alleged Mr O’Donoghue, who was granted legal aid, discharged a single shotgun blast at the injured man, sparking a major investigation.

The court heard that Mr O’Donoghue allegedly fired a shot from a legally held single barrel shotgun, injuring Mr Hayes, 65, in the shoulder.

The court heard that the firearm allegedly used by Mr O’Donoghue was recovered by gardai in his van in Barnakyle, Patrickswell, on the day in question.

The long running dispute, which it was later estimated has gone on over seven or eight years, is to do with access to farmland at Ballycasey, Kildimo, the court heard.

The injured party stated the accused fired a shot at him, injuring him and killing his dog, Garda Mitchell told the court.

Gardai expressed a fear that witnesses in the case could be interfered with and that the accused did not seem to comprehend the seriousness of his actions.

“While it is an unfortunate scenario, land rights have well been played out in rural Ireland in the courts and will continue to do so,” Inspector Alan Cullen, Newcastle West, told the court.

“This matter should never have troubled the district court, it should be in civil court,” he added.

Mr O’Donoghue’s brother William offered to provide surety for the accused and told the court that the dispute had been going on for “seven or eight years”.

“It would flare up,” he said. “It happens inside the farm,” he added.

The court heard that Mr O’Donoghue – who will turn 73 later this month and lives alone – had seen his health deteriorate in recent years.

Judge Keane said it was a “very serious matter” and the court heard that there was a “history of dispute between neighbours” that had become “seriously entrenched”.

However, given Mr O’Donoghue’s willingness to provide surety for his brother, manage his farm and monitor his activities, she said she was prepared to grant bail under strict conditions that if breached at any time, would see the accused immediately arrested.

Mr O’Donoghue, who lives a mile from the accused, said he would ensure his brother met all the conditions of bail, including chaperoning him to Mass.

Bail was granted under Mr O’Donoghue’s own bond of €250, an independent cash surety of €5,000 and conditions that he was not to go to the farm at Ballycasey for any reason, that his brother Mr William O’Donoghue would assume full responsibility for the day to day management and husbandry of the accused’s farm and that he sign on daily at Newcastle West garda station.

Mr O’Donoghue was, the judge said, to have “absolutely no contact whatsoever” with witnesses and adjoining land owners and stay away from public places where the community of Kildimo congregate, “such as Mass”.

She said: “Mr O’Donoghue, if you see your neighbours, you block them out, don’t even look at them.”

She said the accused must obey a curfew of 10pm-8am.

Mr O’Donoghue was remanded in custody with consent to bail to appear at Limerick District Court on Tuesday, June 20.