Jobs boost for Limerick 'another vote of confidence' in city's future 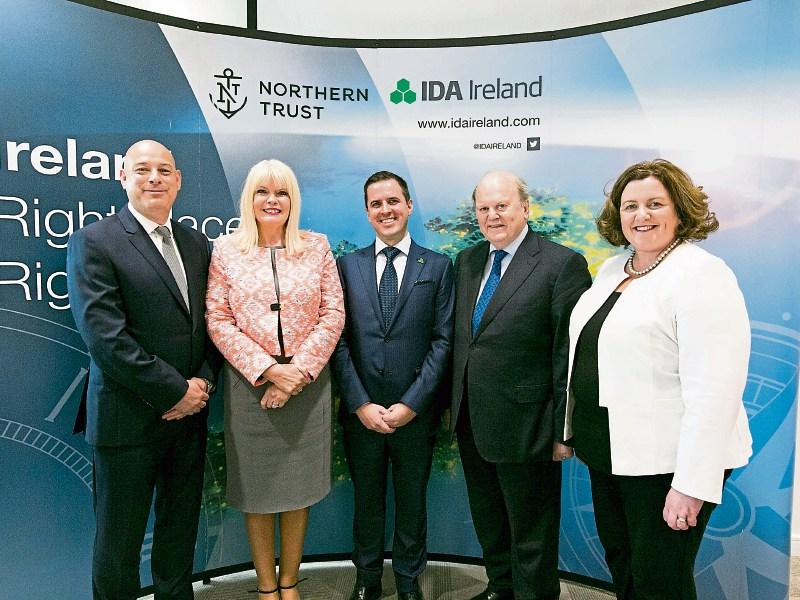 THE CREATION of small pools of jobs in Limerick should never be taken for granted, Minister for Finance Michael Noonan has urged, citing the example of Northern Trust.

From seedling beginnings in 2007 when the US financial services company opened here with 19 staff, it now employs 1,000 people across its two sites in Limerick at Hamilton House and City East Plaza.

This Monday’s announcement that the company is to create a further 400 jobs over the next five years is a further sign that the city has shaken off the shackles of its past, he said.

“Sometimes the intangible is more important than the tangible. We’re proud people again. That sense of ‘We’ve all been ruined’ – that’s gone now.

“There’s a buzz out of the place – the buzz of confidence, the buzz of morale, and the buzz of ‘We can do it.’ That’s a great position to be in. The city has a huge future,” said Minister Noonan.

It was his fourth time being associated with jobs announcements in Northern Trust in recent years, with the IDA creating a record 1,400 jobs in the region in the past 12 months alone.

Minister Noonan was presented with a first edition copy of Early Irish Laws and Institutions by Eoin MacNeill, the first Minister for Finance in the State in 1919, on behalf of the company.

Minister for Jobs, Innovation & Enterprise, Mary Mitchell O’Connor, said 400 lives and families will be “positively impacted” by the announcement.

“We have seen growth in the scale and operation of our Irish business over the years and the continued expansion of our office in Limerick reflect this,” said Mr Bellows, who acknowledged the support of IDA Ireland, the University of Limerick and the Limerick Institute of Technology.

He said half their staff are graduates of those two institutions, and it was due to their presence that they chose Limerick as one of their main bases.

Martin Shanahan, head of IDA Ireland, said the company’s commitment to Limerick and the country has been “exemplary.”

Labour deputy Jan O’Sullivan said this jobs boost is “another welcome vote of confidence in Limerick.”

“At a time when people are worried about a concentration of new jobs on the east coast, it is most welcome to see a big boost like this for Limerick over the next five years,” said deputy O’Sullivan.

Sinn Fein deputy Maurice Quinlivan said the announcement by Northern Trust shows that “Limerick is a fantastic city in which to do business” and highlights the potential of the city and the region to become a hub for global companies looking for an Irish location.

The Mayor of the City and County of Limerick, Kieran O’Hanlon, praised the company for constantly expanding its operations in the Limerick city region.