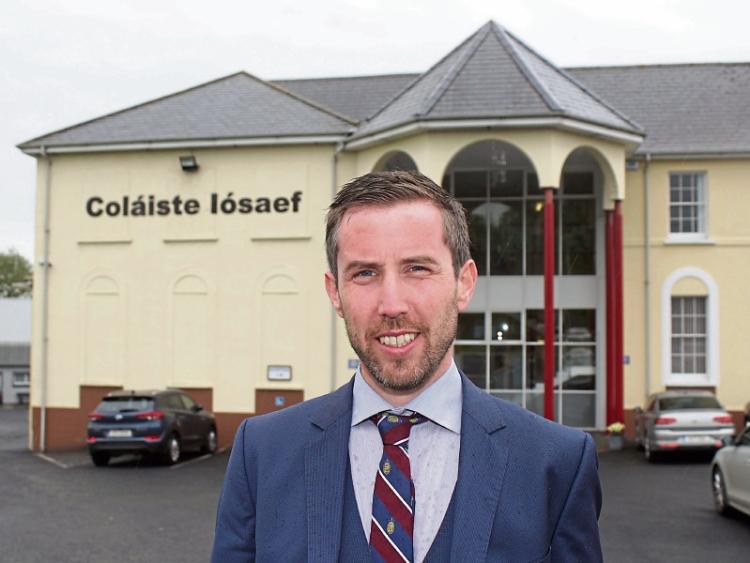 Noel Kelly, who at 34 years of age, was made school principal of Colaiste Iosaef last September

A MULTI-MILLION euro development which has been announced for the secondary school in Kilmallock brings the total financial injection into education in the town to €16m.

“Between the investment in the primary school and post primary here in Kilmallock, you are talking about around €16m,” explained Noel Kelly, principal of Colaiste Iosaef secondary school in Kilmallock which is to undergo an €8m extension.

This Sunday an open day will take place in the nearby €8 million Scoil Mocheallog primary school which caters for over 300 students. The school opened its doors to students after the Easter holidays.

At the end of this month work is due to begin on an extension at the secondary school which will bring the capacity from 450 students to 650 students.

“It’s what the department refer to as a stand-alone build located on the left hand side as you face the front of the school, and we are very fortunate that it will be managed by Limerick and Clare ETB.”

The majority of the ground work will be done this summer – June, July and August - so it shouldn’t impact on the traffic management of the students being dropped off and collected from school.

“The plan is that next summer the new building will link into the existing building. There will be a set down area for cars and buses.

The extension will include 12 classrooms.

“There will be a number of specialist rooms. There are going to be new science rooms, technology rooms, demonstration rooms and we are going to have a new staff room. Our current staff room will become a family resource room for our home school programme. A lot of our older smaller classrooms that go back to the convent era will become small resource rooms, offices and they will be used for storage,” Mr Kelly explained.

“There are eight prefabs currently in use while other classrooms have beautiful stained glass windows.”

The main build will be a new state-of-the-art PE hall with a gym overhead.

“That will allow us to develop in the areas of sport. We played Harty hurling this year and we are looking at playing Harty again next year.”

It is planned that the existing sports hall, Sr Maura’s hall, will be transformed into either a canteen or the alternative is to keep it as a second PE hall.

“The funding will be coming through the Department of Education, thanks to the good work of the LCETB. Sean Burke, the former CEO of the County Limerick VEC would have initiated the process with Eamon Murphy (Head of Capital and Procurement Section of LCETB) who has been instrumental in it along with George O'Callaghan, Chief Executive of Limerick and Clare Education and Training Board.”

Meanwhile, the town’s old vocational school is being relaunched as the Kilmallock Town Campus of Further Education.

“We would have colleagues up there teaching post Leaving Certificate courses,” said Mr Kelly.

Mr Kelly, who lives near Cappawhite with his wife Catherine, a primary school teacher in Cashel, was appointed principal of Colaiste Iosaef last September at the age of 34, making him the youngest secondary school principal in the county.

“As you begin to move through the management structure you begin to see a larger picture at play - the students’ entire environment and what’s happening at home and then as principal you are getting a helicopter view of everything.  The students here are absolutely fantastic - I couldn’t see myself anywhere else. We have a fantastic board of management and parents association.