Upgrades turn the walking route into a cycle-friendly greenway 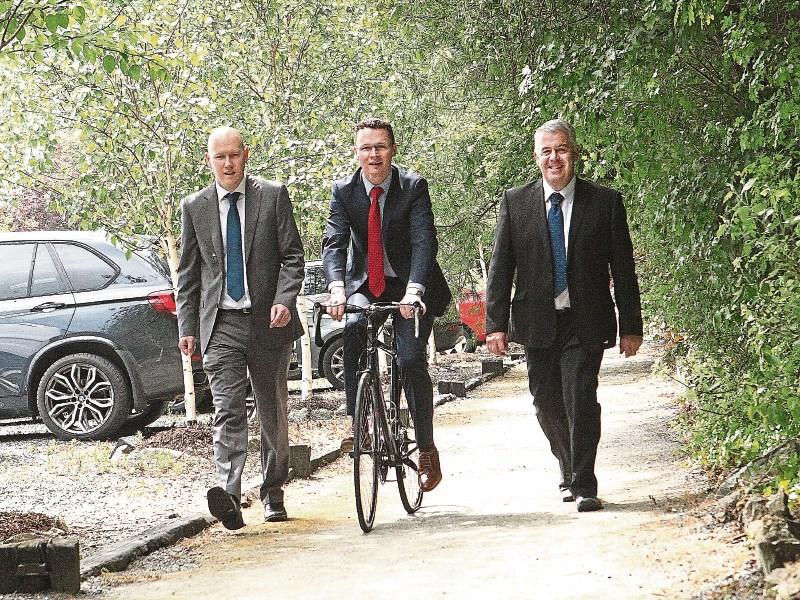 Gordon Daly, Patrick O'Donovan, Minister of State for Tourism and Sport and Conor Gilliganat the start of enhancement work on the Great Southern Greenway

UPGRADE works are beginning on the Great Southern Greenway in West Limerick, including the replacement of 20 sets of farm crossing gates along the 39km route.

The upgrades, intended to make the route more cycle-friendly, will now be carried out following the signing of contracts between Limerick City and County Council and Roadbridge Ltd.

The new gate and cattle grid arrangements will allow cyclists to comfortably travel the route without having to dismount the bike at each farm crossing, thus converting the trail to a greenway.

“When complete, this will also provide greater opportunities for local people to get involved in cycling, running and walking in the local area, something as Minister for Sport I am always trying to promote,” he added.

The greenway, which currently runs from Rathkeale to the Kerry border near Abbeyfeale, was originally developed by the Great Southern Trail Company, and came into the hands of Limerick City and County Council in December 2015.

The current contract, valued at €150,000, is phase one of a number of future developments.

These include new signage for the entire route, which is currently at tender stage, and the extension of the greenway by 3km from Rathkeale to Ballingarrane, which is also intended to be done this year.

Limerick City and County Council is currently at the design stage for the incorporation of the Barnagh Tunnel and viewing area onto the Great Southern Greenway, which involves the provision of an underpass beneath the N21.

This will add a further 1.3km onto the Greenway.

A longer term plan includes carrying out a feasibility study to extend the greenway from Rathkeale into Limerick city and up to Montpelier. Kerry County Council is currently looking at the potential of extending the Great Southern Greenway to Listowel and onto Tralee in the future.