Lessons on a poetic life: Brendan Kennelly looks back during Limerick school visit

Now in his early 80s, the renowned poet reflects on his life and his work 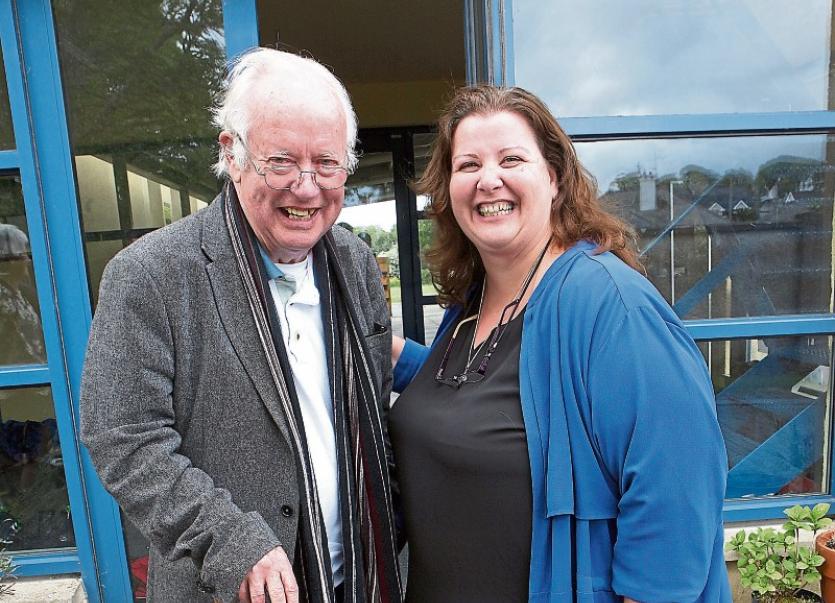 Brendan Kennelly is welcomed to Coláiste Na Trócaire, Rathkeale by his niece Mary Kennelly who is the principal of the school Picture: Dave Gaynor

Legendary Irish poet Brendan Kennelly might need help to get up onto the stage, walking stick in tow, but once he is in situ, with a microphone in his hand, verses roll from his tongue as though they are the lyrics of a piece of music.

“I don’t think I wrote poetry at all, poetry wrote me!” he exclaims, in an attempt to explain just how he does it.

Often touted as the country’s greatest living poet, he is now in his early 80s, yet was still flashing his famously broad smile during a visit to Coláiste na Trócaire in Rathkeale recently.

It was a rare and golden opportunity for students, who got to meet a poet whose work they are studying on the school curriculum. The visit was made possible by principal Mary Kennelly, who is a niece of Brendan’s and a poet herself.

“It’s wonderful to actually have a chance to meet a poet, who is well known and has been practising his craft for a very, very long time,” said Ms Kennelly by way of introduction.

“I know him all my life, and I knew him first as my uncle, who was great sport and great craic. He brought chaos and joy and laughter, he was the best uncle,” she remembers with a smile.

“If you were short, anytime, you could write him a letter, and you’d get a letter back, and inside would be a one pound bill, and he’d say ‘go and buy Nash’s lemonade and biscuits for yourself’.”

The charming recollections of Ballylongford native Brendan on the way he was at home, while his niece shared the stage with him, made for touching nostalgia. Mary recalled her first time reading Brendan’s poetry.

“When I was about 10 or 11, I was staying with my grandparents and I came across a book that they had a copy of, called ‘A Small Light’, and it was the first time that I read some of Brendan’s poetry,” she said.

“I knew he was a poet before then, but I read this book and it was just like falling into a story, falling into this world that he was able to create. And he has been one of Ireland’s most celebrated poets with a huge body of work behind him.”

Brendan spoke in a strong, clear voice, beginning by telling the story behind a poem about his father, who was a “fairly typical Kerry rogue”.

“He used to come down from the bed every morning, and he’d start dancing in the middle of the kitchen floor, and he’d put his hands around my mother’s head, and she’d let him do it because she was tickled by it!”

Brendan broke out in song – When You Were Sweet Sixteen – recalling his father singing it to his mother.

“When I think of him now, so many years later, I see him dancing in the middle of the kitchen floor, and I say an aul' prayer for him, and so I wrote I See You Dancing, Father,” said Brendan, before reading a few lines.

I go back beyond the old man,

To find the unbroken man.

It is the moment before the dance begins.”

Cradling the curved staff he uses to walk, Brendan spoke in a smooth rhythm, reading his own written words as though they were coming to him again for the first time.

“I wrote Begin when I was in hospital after a heart operation. And when I woke up after the operation, I just felt grateful to God, for the opportunity to be alive, to begin again. And I wanted to thank the surgeon, Dr Nelligan, for operating on me as well,” he said.

“Every morning that you wake up is a gift from God. To have it all before you, a whole day. It is thrilling to be able to begin again; it is a new opportunity, a new day,” he stressed, before reading Begin.

“...Though we live in a world that dreams of ending,

That always seems about to give in,

Something that will not acknowledge conclusion,

Insists that we forever begin.”

The impressive musical performances by the school’s traditional choir delighted those both on and off the stage. Two students performed an Irish dance, to which Brendan Kennelly clapped vigorously.

Looking so moved as to shed a tear, he bobbed along to the sweet flute and stunning voices singing On Raglan Road, written by his friend Patrick Kavanagh.

In response to a question about the themes in his poetry, he said: “Poetry is about living and loving.”

“When we live, we get the chance to love, and when we love, we get the hope to live more. So live and love, love and live, those are the chief themes of my poetry.”

A lot of modern poetry is too difficult, according to the veteran poet, “even inaccessible”. He read his poems aloud to himself during the writing process. “A poem read aloud as if by another person, it goes straight to your soul and it gets stuck there!” he exclaimed.

Mary Kennelly said that Brendan “has been a teacher all his life”, and always loved teaching.

“To be back in front of a class is a joy for him. And I do know that it means a tremendous amount to him that his poems went on to the Leaving Cert course a few years ago,” she said.

“He’s gotten lots and lots and lots of awards, but to know that his work would continue with young people, who he has worked with all his life, is very important to him.”

Brendan concluded his talk with some sage advice.

“When you enjoy something, when you really enjoy it – whether it's marriage or reading or whatever…

“When you enjoy something you get to know it. So the inference is, enjoyment is knowledge.

“And education is all about knowledge, and it should be enjoyed.”