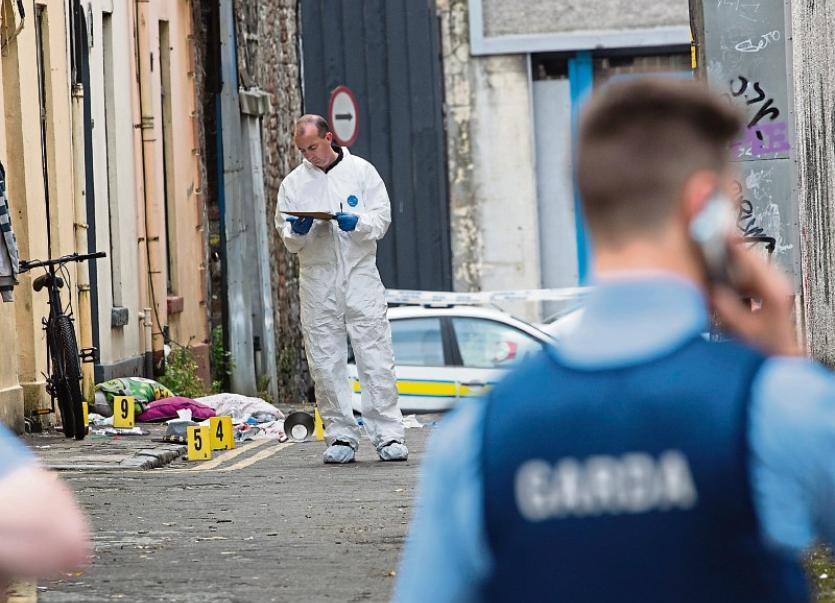 Gardai and crime scene investigators at the scene on Roches Row Picture: Press 22

THE LAST words of a Romanian man who was stabbed to death on the streets of Limerick city this Wednesday were 'I'm dead', sources close to the family have said.

The man, who was aged in his mid-50s, died following the violent incident after 1.20pm at Roches Row, which links Thomas Street and Roches Street.

“They are a very peaceful family. I have known them for years. The deceased was a most inoffensive person and was not in any way troublesome. I only spoke to him 24 hours before,” James Walsh, a friend of the family, told the Limerick Leader.

A man in his 50s who was arrested at the scene of the incident is continuing to be questioned at Roxboro Road garda station.

Chief Superintendent David Sheahan, head of the Limerick garda division, said that the period of detention for the suspect was extended at approximately 3pm this Thursday for another 12 hours under Section 4 of the Criminal Justice Act (1984).

Chief Supt told the Limerick Leader that their investigations are continuing and they are endeavouring to establish a motive for the attack.

"CCTV footage has been harvested from a number of locations going to and from and scene, and gardai are carrying out door-to-door enquiries at present. We would appeal for anyone in the area to come forward and make themselves available to gardai and assist with the investigation. We will be interviewing all witnesses until we are satisfied that we have the full picture of what happened," said Supt Sheahan.

A number of members of the deceased's family have already been interviewed.

It is understood that the attack occurred inside the deceased's home and spilled out onto the street. The scene remained sealed off this Thursday afternoon.

A number of individuals came to the man's aid, including his own relatives, before gardai and paramedics arrived.

Those close the family said: “The deceased's relatives saw him being stabbed many times with a large knife. His last words were 'I'm dead'. His nephew intervened and tackled the attacker to the ground, who then tried to stab him. The attacker then told him 'I'm going to kill you as well'.”

Two passers-by came to their assistance, and tackled the suspect to the ground until gardai arrived.

The deceased is believed to be a single man with no children.

His relatives moved from Romania to Limerick some five years ago and he later joined them.

Leonie Kerins, director of Doras Luimni, a charitable group which supports all migrants in the Mid-West, said that the deceased and his family are known to them.

"We wish to send our condolences to his family and the wider Romanian community in Limerick, and we will be available to offer them assistance in any way we can," said Ms Kerins.

Gardaí have recovered a weapon which they believe was used during the fatal assault .

Any witnesses are asked to contact Henry Street garda station at 061-212400.