Limerickman gives louts a 'pizza' his mind over riverside littering 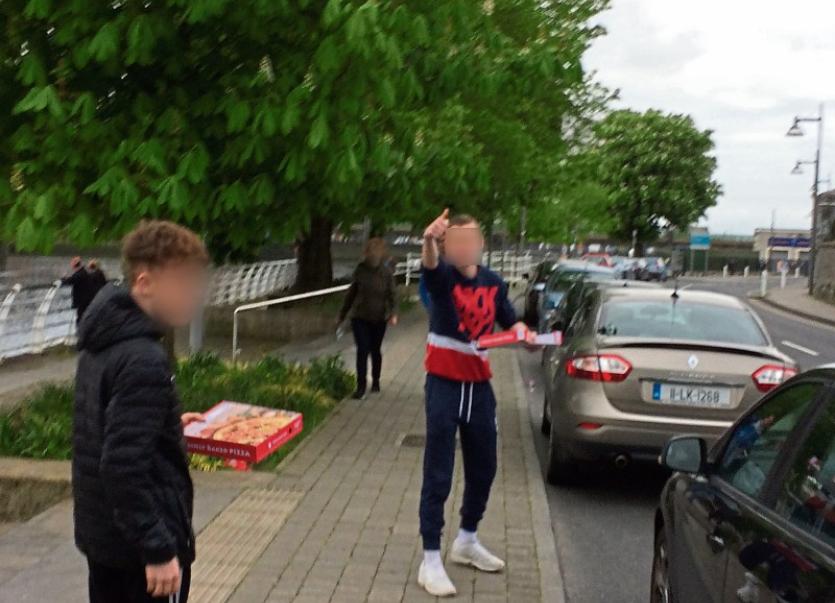 This photo was taken by Paul Browne during the incident

A BUSINESSMAN who confronted a number of youths that threw fast food packaging on the ground says more needs to be done to generate a sense of respect for the city.

Paul Browne contacted the Limerick Leader to express his frustration following an incident that happened last week at O’Callaghan Strand.

The 40-year-old father-of-two, who works in the city centre, described how he encountered a number of youths while walking with his young daughter at around 7.30pm in the evening.

“As we paused to watch the canoeists on the river a group of four young people were just ahead of us eating pizzas and messing as young people would,” he said adding that one of them then caught half the pizza carton and threw it into the river.

“My feeling on litter is that we should enforce it in the same way they enforce it in Singapore. Maybe then parents might bring up their kids a little different,” he said.

After shouting at the youth to suggest that he dispose of the remainder of the rubbisg in a bin, Paul says he was subjected to a foul-mouthed tirade resulting in him calling the gardai.

“I followed them as quick as I could and I pulled out my phone for a few photos. Initially they all covered their heads and faces and then I got a few snaps.

“They got more distance between us and just threw the rest of their rubbish on the ground and they roared back at me to tell me they had done it.

“The young fellow continued to shout and roar back at me knowing he had a comfortable distance between us,” he explained.

Paul says the incident, which happened less than a week after TLC3, higlights the lack of respect which a significant number of young people have for the city and people in authority.

“They were shouting and roaring and f-ing and blinding at me. To be honest I can give as good as I can take but I have no time for little pups like that. Lads these days don’t give a s*** and they are happy to roar and f and blind at people whoever it is,” he said adding that he might have taken further action had his daughter not been with him.

“When I younger I used to hang around in a group as well – many of whom I am still friends with. If we were ever approached by an adult we would always take what was due to us.

"If we were kicking a ball and kicking it off a car or something like that. Alright they have been off for two weeks (for Easter), is it a case that they had nothing to do so they were floating around eating pizza?” he said.