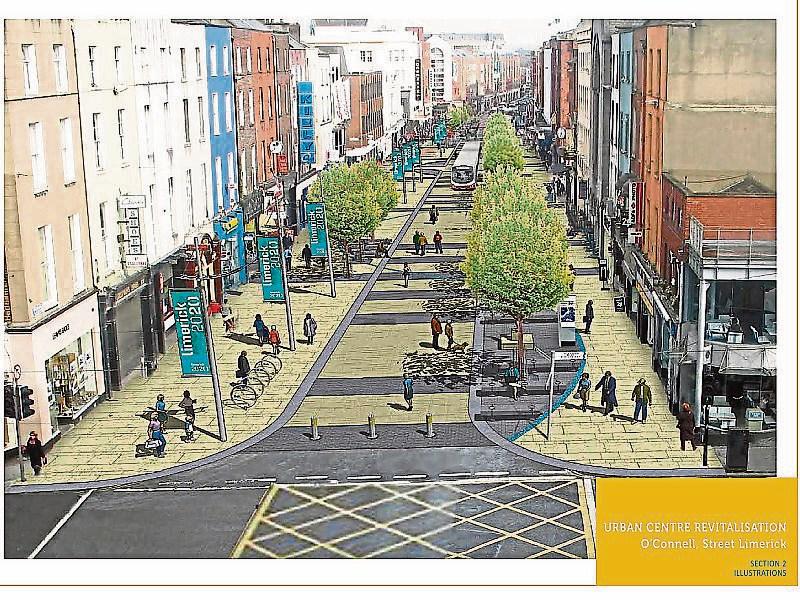 THE €9m pedestrianisation of O’Connell Street will move a step closer in the coming weeks as exploratory works get underway.

Limerick City and County Council has confirmed that site investigations works deep below the city’s premier street will start shortly.

These are required to determine the location of services such as water and electricity and the condition of the crown of the coal vaults.

It will involve the excavation of narrow shallow trenches using mini diggers along the edge of the footpaths and across the street.

The trenches across the street will be carried out in stages to allow traffic to continue to flow.

Up to four separate crews will be working at any one time along the street in order to complete the works as quickly as possible – and within a three month timeframe.

The council has warned that these works will result in the suspension of a number of parking spaces.

Funding of €4.1m from the European Regional Development Fund (ERDF) has been secured to revitalise O’Connell Street from the Denmark Street junction as far as the Barrington Street junction, approximately 786 metres in length.

The total cost of the project is €9.1 million with the balance of €5 million coming from Limerick City and County Council.

In a statement, mayor of Limerick Kieran O’Hanlon said: “I’m delighted that work is going to be carried out on the rejuvenation of O’Connell Street. A new look O’Connell Street is part of the overall transformation of the city centre.

"These site investigation works are necessary and I’m happy that all businesses will be accommodated with access at all times. The city centre remains open for business.”

Years in the pipeline, it is anticipated cars will eventually be removed from the main portion of O’Connell Street by 2018.

A design team was put in place last year.