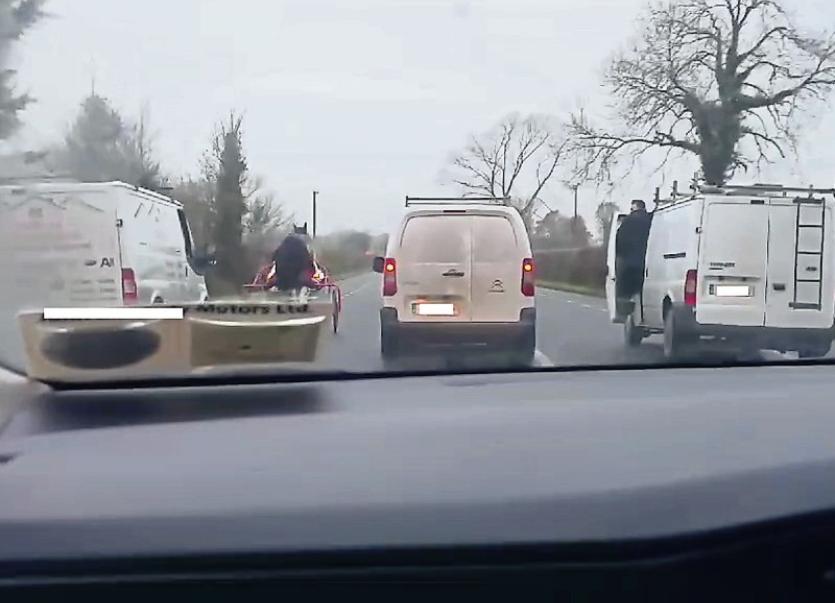 A recent incident of illegal sulky racing on Limerick roads

IT HAS been suggested that a purpose-built track for sulky carts in Limerick could help to “nurture the sport” and save money on horse control.

The topic of sulky racing was up for debate at this month’s Adare Rathkeale municipal district meeting, after a draft set of bye-laws, relating to the control of racing on public roads, were presented ahead of their publication for public consultation.

Independent Cllr Richard O’Donoghue suggested that a track to facilitate racing and training for the sport commonly known abroad as ‘trotting’ would be an “investment” by Limerick City and County Council.

“I enjoy watching the sport, it’s popular in the States. Maybe rather than the route we are going down, if a track was provided in the county or in the country, where they could go up and use their sulkies and nurture it as a sport, it would do a lot in the way of the amount it’s going to cost the council,” he said, referring to the horse control costs which were earlier raised by Cllr Ciara McMahon, Sinn Féin.

“If you look at the amount of horse problems we have in Limerick at the moment and the amount it’s costing the council to date with horses that they’re bringing in... Wouldn’t it be a lot easier to actually invest it in something and try to promote the sport here?” added Ballingarry-based Cllr O’Donoghue.

“I believe they have a track in the UK now for it too,” he mused.

The idea was floated as the councillors decided to support the new proposed bye-law, which will “control” sulky racing on public roads and give gardai increased powers in prosecuting racers.

Fine Gael’s Cllr Stephen Keary also noted the popularity of the sport in other countries as a “national sport”.

“As a sport, it’s a joy to watch if it’s properly regulated and controlled, and it’s done throughout other countries, like America and Australia as a national sport as such.

“There’s some of the best equine bred in the world in Ireland. If the sport was regulated I think it would clean it up to some degree,” added Cllr Keary.

Cllr Ciara McMahon raised concerns that the tighter regulation as a result of the new bye-laws could increase the number of horses being destroyed under the council’s control of horses programme.

Earlier this year, Limerick City and County Council estimated that it would spend €475,000 on horse control in 2017.

Council executive Kieran Lehane said that 80% of horses seized are in the city.

Other suggestions to further regulate sulkies mentioned during the recent Adare Rathkeale meeting included the use of registration plates.

“I would suggest as part of the new bye-laws, to give more support to the gardai, that there would be some form of a number plate as an essential part of using the road,” said Cllr Keary, while Cllr Kevin Sheahan suggested reflectors on the vehicle.