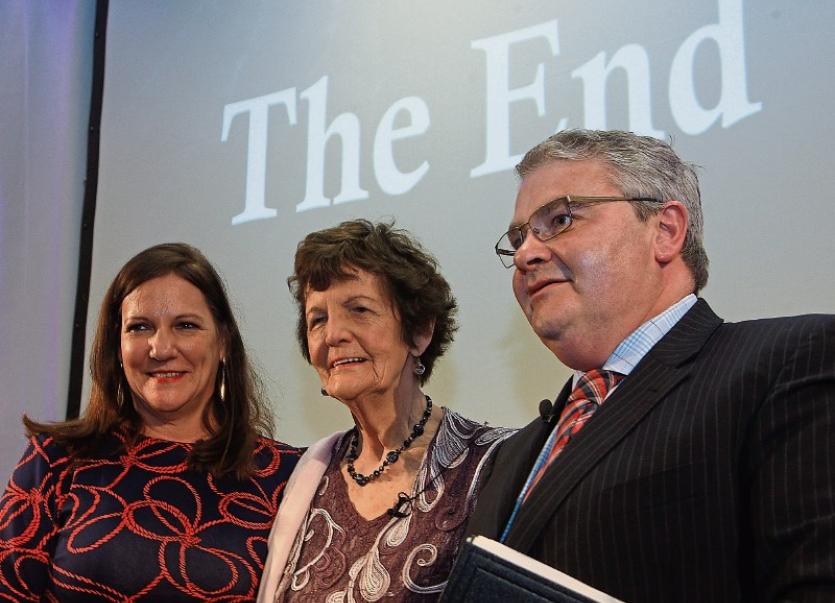 Philomena Lee with her daughter, Jane Libberton, and Seamus Hennessy

THERE were lights, cameras and screens.  Even the carpet was red.  And when Philomena Lee stepped on to the stage at Newcastle West library, she got the full-blown five-star treatment worthy of any star.

In a spontaneous gesture of admiration and respect, the huge crowd rose as one and welcomed home one of their own.

Emotion shimmered in the air. It was a moment to hold and remember.

Flanked by Jane Libberton, her daughter, on one side, and by Seamus Hennessy, her interviewer on the other, Philomena beamed out at the crowd.

She was home. She knew it. And she loved it.

Since the film Philomena was released in 2013, the Newcastle West native has told her story in public many times: the story of a young, unmarried Irish girl giving birth to a son in a mother-and-baby home in the early 1950s, rearing him there until he was three and a half and then being forced to give him up for adoption to an American family.

But this telling was different. Different because nearly everyone in the tightly-packed audience knew the places she grew up, knew the brother Tossie who was such a support to her even while she kept her son’s birth secret from other family and even her other children.  Different because they recognised and were familiar with the world that had demanded such a sacrifice.

For 50 years, Philomena said, holding her hand to her heart, “I had to keep it in here.”

But now as the story came spilling out, as heartfelt as on its first telling, Philomena’s character also stood revealed: she was warm, feisty, funny and devastatingly honest.

“He just wiped me out of his life,” she said of her father.

“I gave up religion,” she said, explaining what happened after she lost Anthony to adoption.

“But I still prayed in here.”

She spoke of her anguish in the weeks, months and years after that tearing loss. But she recalled too the effort she made to build a new life for herself in England, where she became a psychiatric nurse, met and married her first husband and had two more children, Kevin and Jane.

“I never forgot about Anthony,” she said, time and time again. All down the years, she kept in touch with the mother-and-baby home in Roscrea.

Nor did he forget. Now known by the name Michael Hess, with a prestigious career in political circles in Washington DC, he came to Ireland and to  Roscrea looking for her.

Philomena too, broke a lifetime’s secrecy in 2002 and told her other children, an event which was to set in train an  international search for her lost son.

In the hush of Thursday night, Philomena recalled,  she got a message from a nun in Cork saying she had information for her.

“I thought I had found him,” Philomena said. But instead:  “Sr Sarto said she had information for me. She said I am sorry to tell you your son is dead.”

The starkness of it sent little shock waves through the audience. This was real. And far more telling and searing than any film treatment.

But there were moments of great humour too as when Philomena recalled her visit to the Vatican and meeting Pope Francis. “I thought if only the nuns could see me now,” she declared with mischief gleaming in her eye. And the audience loved it.

What stood out perhaps more than anything was  her lack of anger and bitterness at what had happened. She had learned, she said, to never return anger with anger. “It never does any good.”