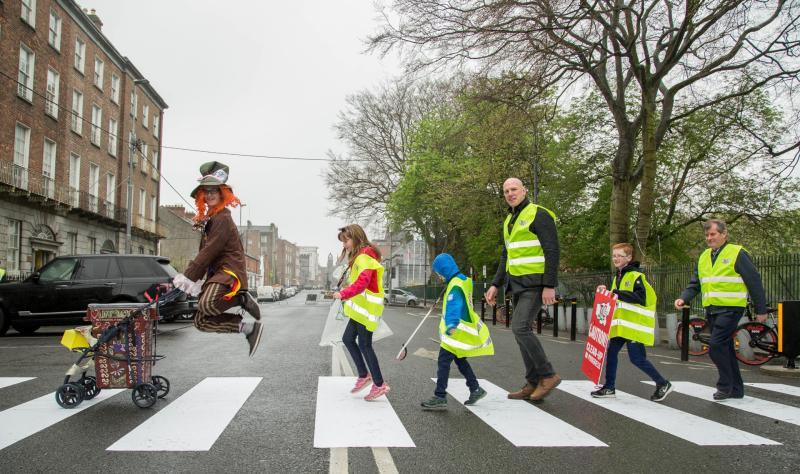 The former Munster and Ireland rugby captain is rolling up his sleeves today and leading Europe’s biggest ever one day clean-up.

“It’s getting better and better and bigger and bigger every year,” commented the Limerick man at Pery Square in the city, where volunteers joined TLC3 instigator JP McManus and friends to recreate the famous Beatles Abbey Road Album cover to begin the massive event.

While Paul’s little girl Lola, 2, is too small to take any major role in the clean-up, her brother Paddy – who celebrates his seventh birthday tomorrow – is taking part in the big clean-up with him mum Emily at Monaleen GAA club.

“Lola will want to be doing something – anything Paddy does, she wants to do it so she will probably be doing some bit of work alright,” Paul smiled.

Over 16,500 volunteers are busy on the streets of Limerick city and the rural roads of the county for the third year for the Team Limerick Clean-up initiative.

Co-ordinated by Limerick City & County Council, Team Limerick Clean-up3 (TLC3) brought a diverse range of volunteers together including families, community groups, schools, residents’ associations, parishes, businesses and sports clubs from all over the county to clean-up their local area in a bid to make Limerick the tidiest and cleanest county nationwide.

It is estimated that 50,000 bags of litter will have been collected on the day by the event partner, Mr Binman.

This year, also saw the largest ever tea/coffee gatherings for volunteers which were hosted at over 300 hundred locations throughout the county. These took place in people’s homes, community & sports centres and schools where over 9000 people attended to celebrate their clean-ups.

Speaking at the launch today, TLC3 sponsor, JP McManus said; “The number of volunteers this year has exceeded all expectations and we are absolutely delighted with the turnout.

“For me, TLC has become synonymous with Good Friday and being part of the occasion gives me enormous pride. With over 9,000 people joining their friends and neighbours for a cup of tea afterwards, it has become far more than a clean-up, but a way of developing a great community spirit in localities around Limerick.

He added: “The entire event is a huge community effort from the people of Limerick and we want to thank each and every one of them for taking part.”

Paul O’Connell added: “The camaraderie that makes TLC such a successful campaign is at an all-time high and we hope that this trend continues with each passing year.

“Some volunteers today were recognisable faces, with members of the Limerick hurling and Munster rugby teams taking part which added to the excitement and atmosphere on the day”.

TLC3 is sponsored by the JP McManus Benevolent Fund and is co-ordinated by Limerick City and County Council and partnered by the Limerick Leader, Limerick’s Live 95FM,  and Mr Binman.

The @Limerick_Leader is proud to support @TLC_Limerick and staff will be taking part around the city today. Best of luck to all involved! pic.twitter.com/UhmHr2q9Ji

Members of the Limerick senior football squad in Mick Neville Park Rathkeale playing their part in the @TLC_Limerick clean up #TLC3 pic.twitter.com/8MJ5E1SxJ5

A team from Janesboro cleaning up one of #Limerick's litter blackspots at Galvone Industrial Estate as part of @TLC_Limerick #TLC3 pic.twitter.com/OyWb0y6EAD

JP and Paul sending out the first text to all #TLC3 volunteers this morning. Best of luck to everyone pic.twitter.com/2lFH5mKm6y