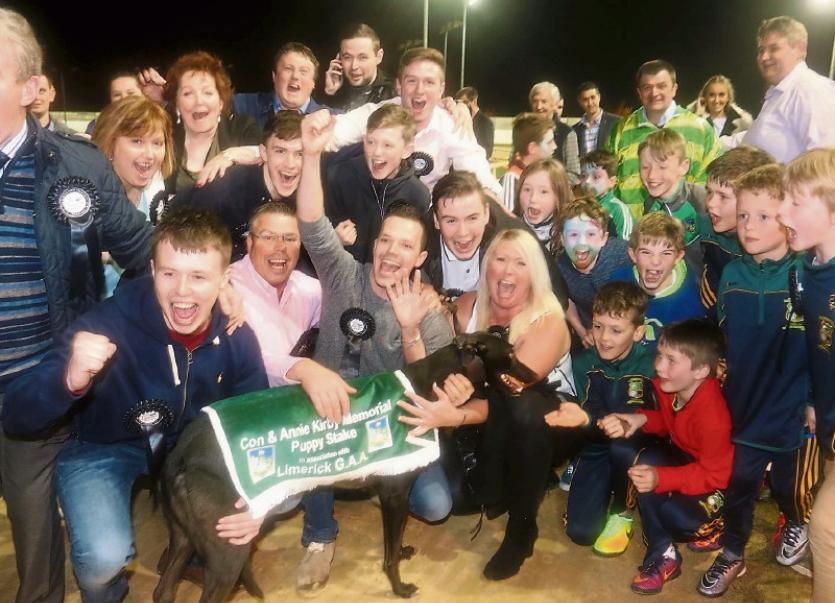 Celebrating Bentekes Bocko’s win in the Con and Annie Kirby

LADY luck smiled on the GAA club that produced Limerick’s most famous hurler, when, in just 28.39 seconds last Saturday, its bank balance rose by an impressive €10,000.

In front of a packed stand at Limerick Greyhound Stadium on Saturday night, Bentekes Bocko produced a powerful display of early pace to capture the Con and Annie Kirby Memorial Stake.

The connections of the winning greyhound received €80,000, while the winning GAA club, Ahane, received €10,000 plus a free fundraising benefit night.

“We are absolutely delighted to get it - it’s a great boost,” said Mary Ryan, secretary of Ahane GAA club.

“There was fierce excitement in the end - we were absolutely thrilled altogether. It’s a fabulous competition.”

Those in attendance were served up a great night of racing but the highlight was undoubtedly the superb performance from the Pat Buckley-trained young star who was preserving an unbeaten record around the track. From the outset it was clear that the Doon trainer’s  Bentekes Bocko was on track to claim the €80,000 prize.

Owned by Beverely Lochead and Austin Whelan, the February ’15 whelp stayed on well to secure a famous success by a length and a half in a time of 28.39.

Austin Whelan couldn’t be present due to his wife being in the maternity hospital but Beverley Lochead celebrated in style as she received the trophy from JP McManus who had made a great effort to make it to the venue fresh from his teatime visit to the podium at Aintree after Cause Of Causes was runner-up in the Grand National.

There was joy for five other Limerick GAA clubs who shared a €10,000 prize fund - Native Chimes representing Killeedy GAA Club took the second place and a prize of €5,000; in third place was Coolavanny Pet (Murroe Boher GAA Club) winning a prize of €2,000; in fourth place was Rathnasare Champ (Feohanagh Castlemahon Ladies Gaelic Football Club); in fifth place was Drive On Tipp (Crecora GAA) and in sixth place was Borsalino (Castletown Ballyagran GAA). The clubs in fourth, fifth and sixth position received €1,000 each.

Ahane GAA is shortly to begin developing its facilities and according to Ms Ryan, the financial boost from Saturday night’s win is most welcome.

“We are in the process of development at the moment - it should be starting in July. We are doing extra dressing rooms at the moment and we have plans for a ball wall later on in the year,” she explained.

The green and gold have been flying the flag for the Ahane, Castleconnell and Montpelier catchment area since 1926.

The population of the parish which produced the great Mick Mackey has grown hugely in recent years with the club catering for around 800 players in teams from U6 right up to senior level in all codes -  hurling, football, camogie and ladies’ football.

Alongside the on-track action on Saturday, there was plenty of entertainment including live music, kids entertainment and Richard Lynch from I Love Limerick judged a Best Dressed Lady competition, won by Niamh Duggan Castleconnell, with Maura McNamara from Crecora the runner-up.