TLC for The Bull: John Hayes to clean out his local roads in Limerick 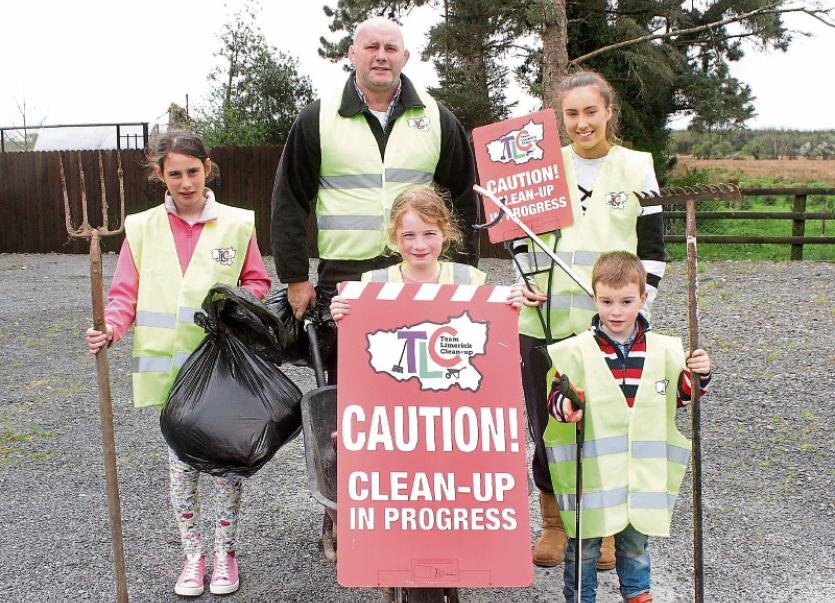 John Hayes with his children Sally, Roisin and Bill, and cousin Yazmin O'Malley ahead of the big clean-up Picture Michael Cowhey

HE was a dab hand at cleaning out rucks and lifting heavy weights such as Paul O’Connell in the line-out, but this Friday John ‘The Bull’ Hayes will be putting his strength to an altogether different use.

The former Munster and Ireland rugby legend will join over 16,500 volunteers for Team Limerick Clean-up 3 - the largest clean-up in any European country.

Volunteers including school children, local businesses, sporting and community groups and residents' associations from across the city and county will take part in the mammoth endeavour which takes place from 10am to 1pm.

“The whole lot of us are going to take part - my wife Fiona (Steed) is off on Friday. We did it last year as well. We usually meet at the community centre in Cappamore and then do our own roads,” explained John Hayes who farms in Cappamore.

While the couple’s two daughters Sally, 10 and Roisin, 8, will be busy getting their hands dirty, their young brother Bill will watch from the sidelines,

“The small fella, Bill, didn’t do it last year and he probably won’t do it this year as he’s too small - he’s only four,” said John.

“TLC is a great idea - it teaches the children the importance of pride of place. When you’ve to pick up rubbish at the side of the road you learn that you shouldn’t throw it out in the first place.”

John’s former teammate Paul O’Connell will join the instigator of TLC, JP McManus this Friday morning to launch the endeavour at Pery Square in the city. They will be joined by the Mayor, Kieran Hanlon, TLC3 volunteers and the Garryowen Comhaltas Group  to re-create the famous Beatles Abbey Road album cover.

Mayor Kieran O’Hanlon is wishing the thousands of people who have volunteered for this year’s Team Limerick Clean-Up the very best of luck this Good Friday.

“TLC is one of the best events ever devised.  It is all about community and the strength of communities across Limerick,” he said.