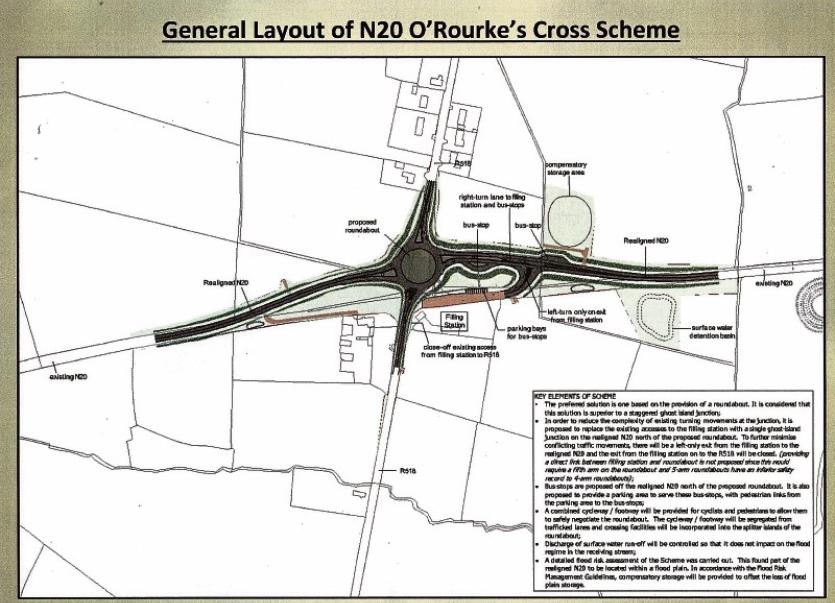 Motorists are making ‘darts across’ the N20 at the current O’Rourke’s Cross, leading to mistakes

COUNCILLORS in the Cappamore/Kilmallock municipal district received presentations on the emerging preferred options for “two of the most dangerous junctions in County Limerick”.

O’Rourke’s Cross, on the Limerick to Cork road, links Newcastle West with Kilmallock on the Bruff line. There is also a busy petrol station. Beary’s Cross connects the N24 Limerick to Waterford road and the R513 through Caherconlish and onto Mitchelstown.

In relation to O’Rourke’s Cross, Mr Bergin said there is a “difficulty in finding safe gaps for R518 traffic turning onto and crossing the N20”.

“They take a dart across and it leads to mistakes. There have been a number of complaints relating to safety generally. Drivers travelling from the Bruree direction are further handicapped by limited sight distance on the N20 to the south.”

Mr Bergin said there was additional complications arising from traffic movements associated with the petrol station. Bus stops, together with the shop, give “rise to a higher number of pedestrian movements than would otherwise normally occur at a rural junction”.

Collision records from 2005 to 2012 show one fatal collision, two serious and 6 minor collisions.

Cllr Mike Donegan asked why it was a four leg, instead of a five leg roundabout.

“I fear traffic coming from the Cork side that wants to turn into the petrol station could be backed up onto the roundabout. It is very busy,” said Cllr Donegan.

Mr Fitzgerald said they considered a five leg roundabout but the accident rate is 40% higher compared to a four arm one.

Cllr Gleeson pointed to the five leg roundabout in Ballysimon.

“How Northern Trust was given planning there was unbelievable. Don’t get me wrong, we welcome them with open arms but there was ample space at the back. It is an intimidating building full of glass and when the sun is shining off it, it could cause an accident. Somebody slipped up there. Everyone you meet is talking about it,” said Cllr Gleeson.

Turning to Beary’s Cross, Mr Bergin said the junction is located on a high speed road, is not well defined and does not comply with national road standards. He said traffic flows entering the N24 is forced to yield to westbound traffic on the N24.

“The approach speed of westbound N24 traffic is high and available gaps are short and close rapidly. Given the high volume of traffic on the R513, particularly during the morning peak, this leads to significant delays with associated high levels of driver frustration and the increased risk of drivers taking gaps in N24 traffic that are insufficient,” said Mr Bergin. Traffic turning right from the N24 on to the R513 must also yield to westbound traffic on the N24.

“This can lead to queues developing in the right-turn lane during the evening peak, an occurrence that will become more pronounced with natural growth in traffic flows. Again, this can lead to driver frustration and the risk of traffic taking gaps in westbound N24 traffic that are insufficient,” he said.

The existing approach road to the N24 will become a cul-de-sac but will continue to be maintained by the council. With proposals to turn the N24 into a motorway in the future Cllr Gleeson said cognisance should be taken of this and to access more land “so as not to be going back again”.

Mr Fitzgerald said the emerging preferred options will be advertised in coming weeks and open for public consultation. “It is very hard to lobby when we don’t have planning.”