Limerick bus services remain at a halt as strike continues 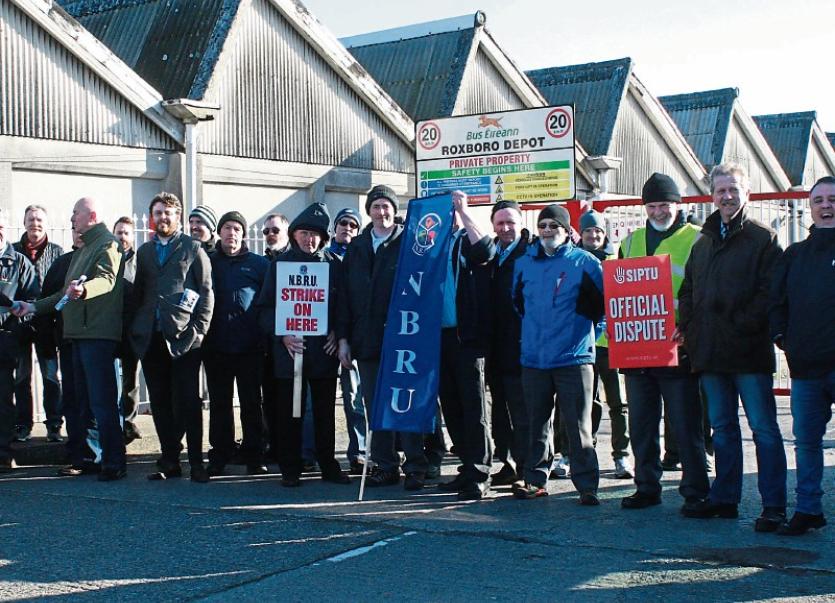 BUS Eireann services in the city remain halted as drivers strike for the fifth day in a row.

Dozens of bus drivers and clerical staff have been manning picket lines since early this morning at three locations – Roxboro Road, Sexton Street and Colbert Station.

The industrial action is over cost cutting proposals at the stricken firm, and is being led by the National Bus and Rail Union (NBRU).

Among the proposals which would affect Limerick is the cutting of the X12 Limerick to Dublin Expressway route.

Normally, the state bus company runs seven regular bus services covering the city and its surrounds, as well as other irregular services covering rural Co Limerick. On top of this, it normally operates twice hourly services to Shannon Airport.

The board of the state bus firm yesterday warned that it could not sign off on its 2016 accounts, or pass this year’s budget without staff approval, and maintained its stance that the company could face insolvency by May is the crisis is not resolved.

Bosses also warned of up to 300 redundancies at the firm, a move described by NBRU general secretary Dermot O’Leary as something which “could open completely different and potentially uncontrollable dimension to this dispute, and will present severe difficulties in trying to maintain the already fragile industrial peace across other companies within the CIE Group.”

Meanwhile, Limerick commuters could face further travel misery in the coming weeks, with Siptu balloting its members at Irish Rail on taking industrial action in support of their colleagues at Bus Eireann.

Mr O’Leary has indicated his union will also explore that option.

Irish Rail services were affected on the first day of the strike last Friday as some staff members refused to pass the picket at Colbert station. But they have since returned to normal.

Mr Cortes was a key figure in disputes which have seen services on the London Underground halted in recent years.