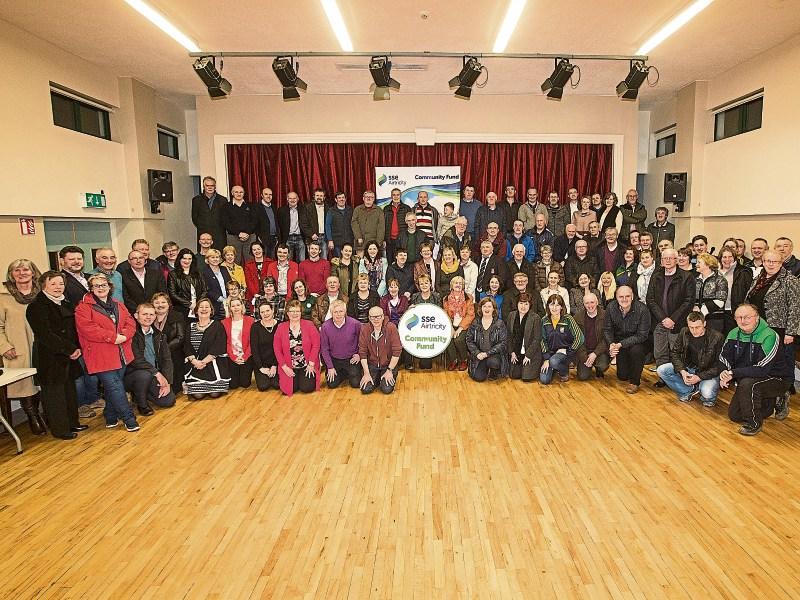 SCHOOLS and local halls, anglers and soccer players, GAA clubs and rugby clubs are among the 45 local groups who walked away with a share of the €227,000 community fund handed over by SSE Airtricity in West Limerick last week.

The money, the company says, is the biggest ever handed over to community groups in the vicinity of its windfarms at Tournafulla, Rathcahill, Dromada and Athea. And it brings to €1.2m, the total allocated in West Limerick and North Kerry since 2008.

The Sustainable Living Group in Tournafulla also received an award which they hope will help them get a new project off the ground. As the group’s chairperson Helen Broderick, explained: “In 2013, we conducted a survey about local needs and we discovered that the community was in favour of setting up a café. The village has no shops or post office, all having closed during the recession.”

But now Tournafulla GAA club has  agreed to let the group use the kitchen space in their new clubhouse which is currently under construction.

“The funding from SSE Airtricity will allow us to install a commercial kitchen, which will be a major boost for the community,” Ms Broderick said.

Their plan for the space will be to run a community cafe but also to allow small local food enterprises to use the facilities.

“We’re delighted to once again be awarding funding to so many forward-thinking community projects,” said Anne Reynolds, SSE Airtricity Community Development Officer, said, citing the installation of a rainwater-harvesting system at  the Abbeyfeale United club

A great many projects funded this year focused on energy efficiency, Ms Reynolds said, among them the installation of LED lights in one national school. “As always, it’s fantastic to see so much of the money going towards projects that improve energy efficiency, which helps reduce heating bills and ultimately leads to a greener and more sustainable environment for the whole community,” she said.

SSE Airtricity’s Tournafulla, Rathcahill, Dromada and Athea Wind Farms in West Limerick have a combined capacity of over 100MW capable of powering over 50,000 homes.