Limerick students get a feel for the cold pinch of homelessness 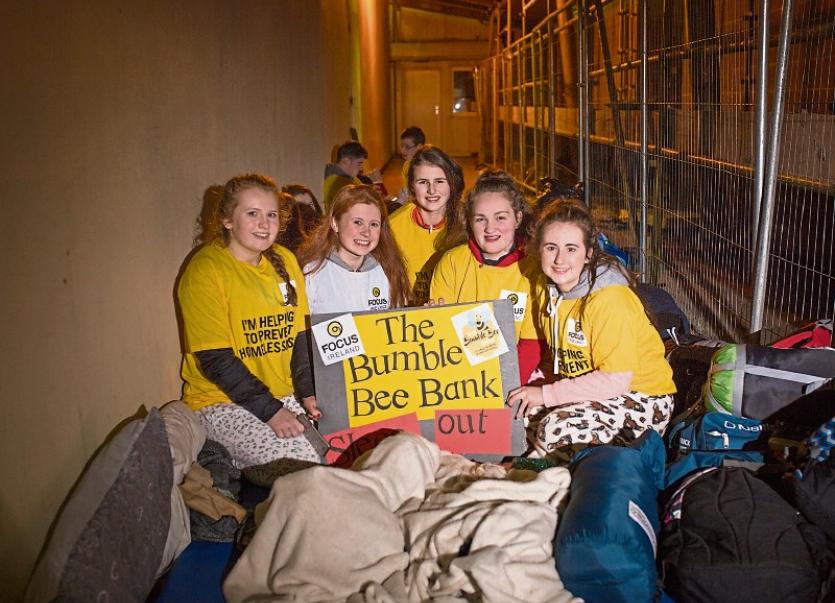 A NIGHT spent outside in a sleeping bag on concreted ground has given new insights into homelessness to a group of  students at Hazelwood College, Dromcollogher.

“It just opened our eyes to what they (the homeless) have to go through every night,” said Ava Mullane, one of the group of 19 Transition Year students who undertook the ordeal.

And while they all survived, they agreed that another night outside was not something they would have liked to do.

The sleep-out was conducted on the school grounds, beginning at 8.30pm and running right through to 8am the following morning, when, as Mary Kate Fehin explained, they had to go straight into class.

“It was cold,” another participant, Ciara O’Flynn recalled. “We were all huddled together.”

But despite being in a group, and with three teachers also nearby, the students felt a great sense of vulnerability, being outside without shelter on a winter’s night.

Ava, Mary Kate and Ciara, along with Eliza Reidy, Katie Ryan and Edel O’Flynn were the group who initiated the sleep out. The six are the founder members of this year’s school bank, the Bumble Bee Bank and are taking part in the AIB Build a Bank challenge.

“We have to have a speciality and we decided ours was to help the community, to give back,” Ava explained.

“Homelessness is such a topical issue and such a big one, we decided to do something about that.”

They made contact with Focus Ireland who gave them all the facts about present-day homelessness and they got whole-hearted backing for the sleep from their TY classmates.

“We wanted to raise money for Focus Ireland and each TY student had a sponsorship card. Then we went the following morning with buckets to the school gate and asked students to donate,” Mary Kate explained.

“We were surprised at their generosity,” Ava added. All the students donated.

The total raised has yet to be finalised, said  teacher Ciara Broderick who took part in the sleep out.

But for a group of students, home and homelessness have taken on a deeper meaning.