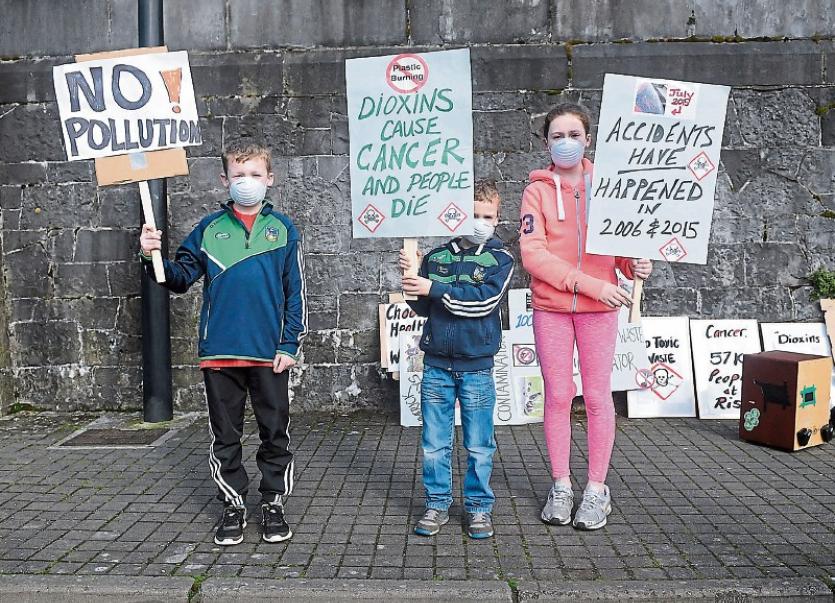 John, Liam and Kate Brouder at the protest

AN Bord Pleanala is expected to receive dozens of appeals to a council decision to allow Irish Cement extend its facilities at its Limerick plant.

Clare Keating of Limerick Against Pollution – set up in opposition to the firm’s €10m plans to burn waste and tyres at Mungret – confirmed her group would “110%” be appealing Limerick City and County Council’s decision to allow Irish Cement extend its facilities just outside the city.

She added they will also be writing to the 76 people who initially objected to the firm’s hugely controversial proposals to call on them to object. Under planning law, only people who objected to the council’s decision can object to the appeals body.

“This isn’t over. They’ve only cleared the first hurdle in this process, and the process isn’t the only thing that counts. We have to have a say in this, and our voices have to be heard,” she said.

Close to 1,000 people attended a protest march in the city on Saturday lunchtime in opposition to Irish Cement’s proposals, which locals fear could release toxic dioxins into the local environment, causing health problems.

There has been criticism of the council’s decision, made under 48 hours before this protest march, with Limerick Against Pollution saying it was “alarmed approval has been so readily granted to CRH to import and incinerate industrial waste from abroad for commercial profit.”

Councillors representing the areas set to be most affected by the proposals – if they go ahead – have also expressed disappointment – but stressed the fact the Environmental Protection Agency (EPA), which is deliberating on awarding Irish Cement an operating licence, still has to make its decision.

Cllr Daniel Butler said: “I think people need to hang tough, and not get too discouraged by this. This is only one part of the process. I think it will focus people’s minds, and motivate the community in a broader context to fight this.”

Cllr James Collins added: “The council cannot take environmental concerns into consideration, that’s the role of the EPA. But we don’t want tyres, plastics and other waste being incinerated in an ageing kiln in the most city’s densely populated area.”

And councillor Malachy McCreesh said: “It’s a sad reflection of the democratic process a planning decision that has such far reaching health impacts within the neighbourhood can be taken with no public consultation.”

For its part, Irish Cement welcomed the permission. In a statement, the firm said: “This €10m investment will help secure the future of the plant, and reduce our carbon emissions by up to 40,000 tonnes per year.”

It acknowledged public concern on the scheme, adding it is committed to continuing engagement.