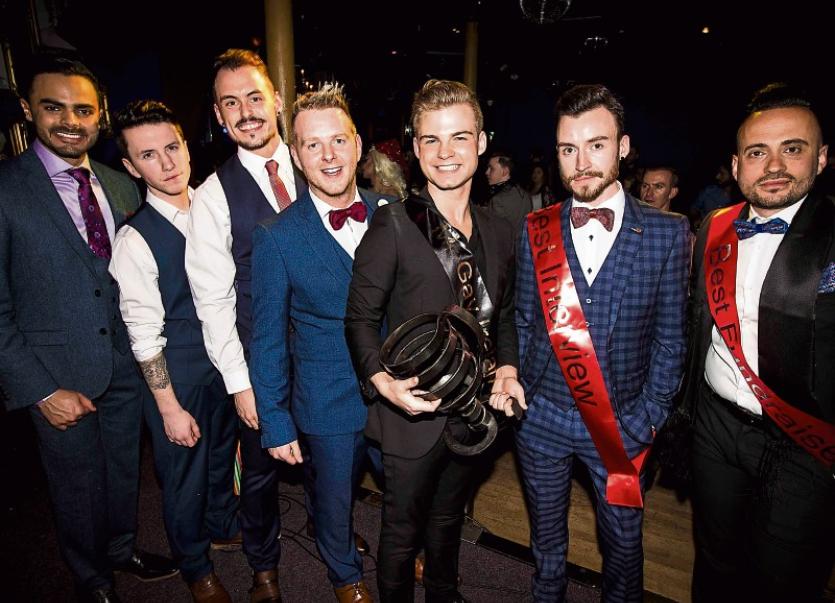 Mr Gay Limerick, Christian Moretti, far right, with other contestants in the final in Cork

MR GAY Limerick has won fundraiser of the year at the national final in Cork, after raising over €1,200 to help with the facial reconfiguration costs of those receiving treatment for HIV.

Dr Christian Moretti, 32, an Italian native, author, and a secondary school teacher in county Limerick, was up against seven other hopefuls to take the crown on Saturday night last.

While he missed out on claiming the overall title, he said he has had “an amazing experience” as Mr Gay Limerick, and would encourage others to fly the flag for tolerance and equality in Limerick, when his successor takes over the role in July.

“It has been an absolutely fantastic experience and I have had an amazing year. There are no words to describe it. I would recommend it to everyone. I have had to face some discrimination and homophobia, but by and large the people of Limerick have been extremely supportive,” he told the Limerick Leader.

While the latest medication allows people with HIV to live out a normal life expectancy, some earlier medication has had an adverse impact on the facial muscles of patients.

The money raised will help pay for collagen injections to “restore the facial tissue and the dignity of the patient to resume a full life in society”. Some of these costs are paid for by the State, but in some cases further rounds of treatment are necessary.

A teacher in Colaiste Chiarain in Croom for the past six years, Dr Moretti has also used his role to raise over €700 for Pieta House, the suicide prevention charity. Dr Moretti, a native of Abulia, in southern Italy, said he always wanted to “give something back to Limerick because it has been such a good place to me.”

“I came here for a job six years ago and Limerick is my home now. I absolutely love the school, and I love Limerick,” he said.

Also a promising novelist, he has published his latest work, with the prestigious Italian publishers, Edizioni Croce, based in Rome.