'Addiction stigma must be lifted': Oisin McConville speaking in Limerick 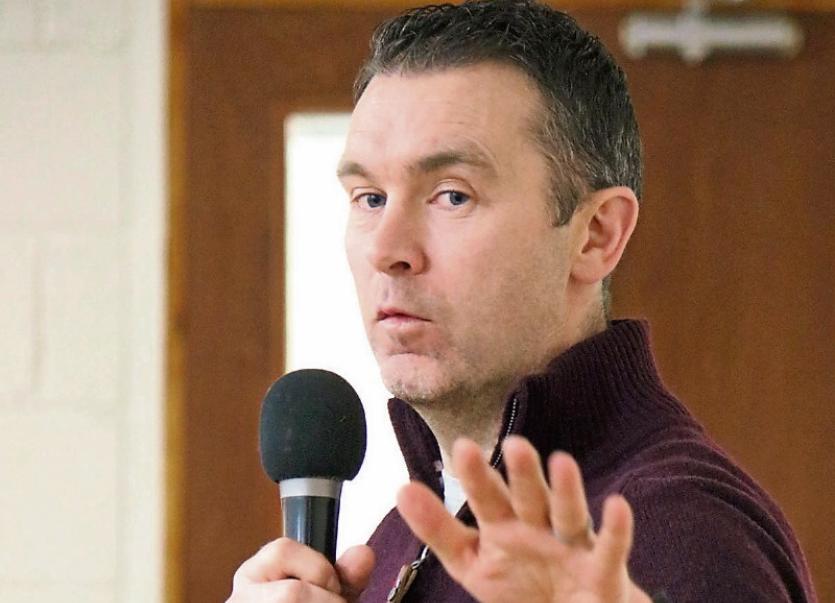 WITH the betting extravaganza that is the Cheltenham festival just around the corner, Oisin McConville spoke in Doon about his gambling hell.

The final straw was when the All-Ireland winning Armagh footballer put €20,000 on a horse. It lost. He went out to his car, dug around for loose change and went back for another wager. That was how bad it got.

Some 11 years later Oisin hasn’t had a bet since thanks to the help of Cuan Mhuire, Gamblers Anonymous and his own mental fortitude.

He has trained as an addiction counsellor and accepted an invitation from Doon GAA club to give a talk last week. Marie Riordan and Mary Purcell, health and well-being officers for Doon and Oola GAA Clubs, wanted to raise awareness about the increase in gambling addiction and Oisin certainly did that in a packed community centre.

“Part of the problem, I think, is that there is still a stigma involved with addiction. Of the people we find in crisis they need to know there is an out and there is an opportunity to get into sustained long term recovery," said Oisin.

"I was lucky enough to have been one of those people who was able to avail of help that was out there. When you are in a dark place you don’t realise there is so much help out there, whether that be for a first port of call a GP, a family member. Once you have made an initial admission things get easier afterwards,” he added.

It is hard to believe that on the pitch the forward was turning corner backs inside and out but off it his own life was upside down.

“A lot of people, when they saw me playing football on TV with Armagh they would say there is a happy, outgoing, confident young man and the actual fact was that inside I was completely different - I was an insecure little boy. A lot of my issues revolved around what was going on inside me. I wasn’t sure exactly where I belonged,” said Oisin.

While he had to do all his betting in a bookies he is worried about younger generations that never have to darken their door.

“They talk about gambling addiction being the most hidden addiction of all. I suppose I get it from a lot of people over my 16 years’ gambling – if you can imagine I was doing that online, think how much more hidden it would have been.

“Those who gamble on the internet or on their phones – one of the things they will say to me is it dosn’t feel like real money, it feels like you are pushing a button and there is money out there in cyberspace. That it is not actually physically taking money out of your pocket and putting it on a horse or whatever it is.

"We are exposing so many more people to gambling through how easy it is and how accessible it is,” he said.

Oisin said it was an “absolutely brilliant” night in Doon.

“We are used to talking about alcohol addiction from the point of view we have a country notorious with alcohol issues. Gambling is the next big thing coming down the track at us. That is why it is great that a community like Doon is proactive about doing something about it.

“Once you start talking about it and exposing it and lifting the stigma away it makes it easier for people to ask for help. I was delighted to be there – I got an unbelievable welcome,” said Oisin.