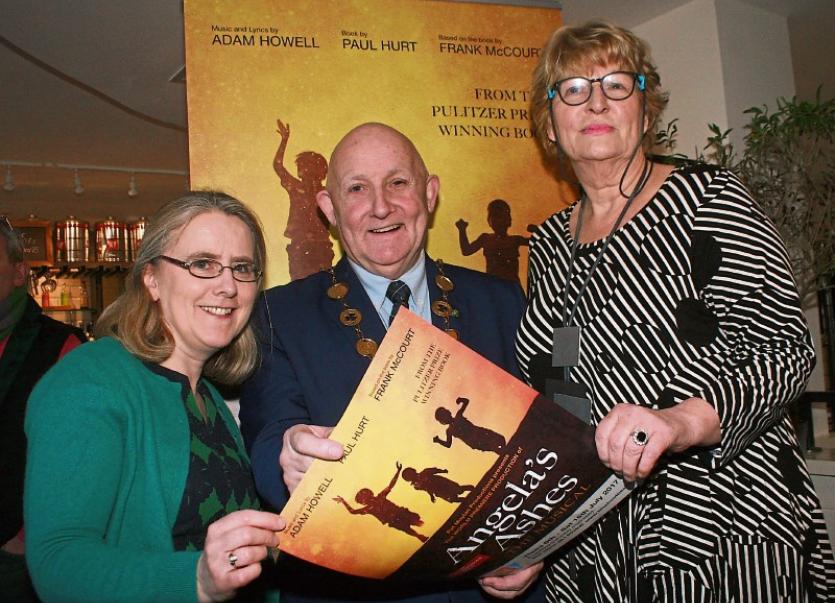 LEADING actors with an international profile are being approached to star in the upcoming production of Angela’s Ashes – The Musical, the critically and commercially acclaimed producer Pat Moylan has confirmed.

The producer – of I, Keano fame – is bringing the world premiere musical adaptation of Frank McCourt's Pulitzer Prize-winning memoir to Limerick for 11 performances this July.

There are hopes at large in the theatre world that it could make it to the West End in London and Broadway in New York, given the international profile of the book, which has sold in excess of seven million copies.

Speaking to the Limerick Leader, Ms Moylan said that she originally wanted to buy the rights to the book to produce a play, and approached the writer's widow, Ellen McCourt, before an amateur drama group in Derby in the UK launched their own musical of McCourt's work.

She said she had been searching for something “extraordinary” to bring to the stage for a number of years, and “wanted to get my teeth into something”, as she neared her end of her five-year term as chair of the Arts Council.

“I thought of Angela’s Ashes – that was the one book that really affected me. I was so touched and moved at the time when I read the book 20 years ago - the conditions that people were living in, and the humour - I really laughed out loud, at his dry wit."

Castings have begun in Dublin and London for some roles, but she said she is in discussions with “a number of interesting and interested parties at the moment."

"If I can land one of them it will be great. They all have an international profile. But really the title, Angela's Ashes, is the big star in this,” she added.

When asked if she'd consider best actress Oscar nominee Ruth Negga, who grew up in Limerick, she laughed but continued to remain tight-lipped on their prospects.

She said this “major production”, with more than 40 people involved, would cost upwards of €750,000 to produce.

Having worked on the production for the past three and a half years, she said it had become “a love project” and was “absolutely thrilled that it's starting here in Limerick; it's the right home.”

Even ahead of its Limerick premiere, she said it was attracting interest "from a lot of theatre people from the UK and the US, who are coming to see it in Ireland" but added "you never know what is going to happen."

One of Ireland’s most successful theatre producers, her credits include Stones in his Pockets, Alone it Stands, The Shawshank Redemption and The Field.

"When I did Stones in his Pockets, I didn't do that for it to go to the West End. I did that because I loved it with all my heart and soul. It was a great play with a great cast, and then the West End came looking for it. It ran for four years there and went to Broadway. But I think if I had tried to manufacture that it wouldn't have happened," she said.

After Limerick, the production will move to the Bord Gais Energy Theatre in Dublin from July 18, for 14 performances, and to the Grand Opera House in Belfast, from August 1 for five performances.

She praised the management of the Lime Tree theatre in Mary Immaculate College in Limerick, whom she said were doggedly persistent in their pursuit to secure the world premiere for Limerick.

Louise Donlon, director of the Lime Tree, said that this production, which will be their largest ever commercial venture since the 500-seater theatre opened nearly five years ago, “is an enormous undertaking and a huge challenge, but very exciting.”

“When we heard we had secured the world premiere for Limerick it was as if all our Christmases had come at once,” said Ms Donlon.

The first musical production of Angela’s Ashes originally came to Limerick under Adam Howell, who composed the original musical score, and Paul Hurt, who wrote it for the stage, three years ago.

Mayor of Limerick, Cllr Kieran O'Hanlon, said “the world premiere really couldn't be anywhere else other than in Limerick, and I'd hope to see 'full house' signs every night.”

It will run in Limerick from Thursday, July 6, to Saturday, July 15, including matinees.