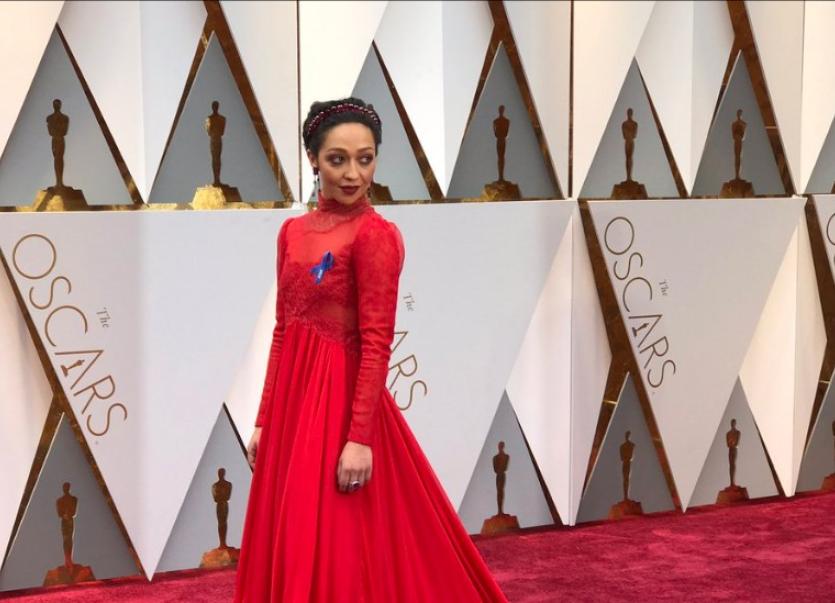 Ruth Negga arrives at the Oscars on Sunday night

LIMERICK raised actress Ruth Negga has narrowly missed out on winning an Oscar at tonight's Academy Awards ceremony in LA.

Ruth, the 35 year-old star of Loving, lost, as had been expected, to the overwhelming favourite Emma Stone, for La La Land.

Stone paid tribute to the "extraordinary women" in her category in her acceptance speech for Actress in a Leading Role at the Academy Awards.

The award was presented by last year's Best Actor winner, Leonardo DiCaprio, who had referred to Negga's turn in Loving as portraying a 'Civil Rights icon'. She was also one of many attending to wear a blue ribbon highlighting the American Civil Liberties Union.

Ruth was accompanied by her mother, partner Dominic Cooper and cousin Dave Malone to the awards at the Dolby Theatre in LA.

Arriving at the ceremony, Ruth told Sky News - when asked about being up against legendary actress Meryl Streep in particular - that it was a "celebration of extraordinary talent by women who have integrity", referring to her fellow nominees.

There was a nice mention for Limerick on E!'s red carpet coverage when the star arrived, wearing a custom made red Valentino gown.

Limerick gets a nice little mention on E! Live from the Red Carpet at #Oscars
"Ruth (Negga) was raised in Limerick, Ireland"

Mayor of Limerick Kieran O'Hanlon had said that, irrespective of whether she took home the gold statuette, he would be inviting the Oscar nominee and her family to a mayoral reception in her honour before the end of his term.

"Of course, we wish her every success. She's one of our own, and I would certainly love to invite her to Limerick to attend a mayoral reception in her honour, for her and her family, before my term as mayor ends."

It is the first time a Limerick raised actress has touched the peak of Hollywood stardom since Richard Harris was nominated for an Oscar in 1990 for The Field.

Ruth's extended family in Dooradoyle and London had gathered to watch the ceremony with anticipation, with Uncle Ger Malone saying in advance that they were all proud and delighted with her success, saying they always recognised their 'star' in the family.

“She’s a hard worker, very committed and deserves every success. She was always a great little actress growing up," he said.

Loving tells the true story of an illegal inter-racial marriage in 1950s Virginia, with the couple battling before the Supreme Court in 1967 for their right to live together as husband and wife.

Ruth went to national school in Roxborough, and later spent part of her secondary school at Scoil Carmel on O’Connell Avenue, before moving to London and completing her drama studies at Trinity College Dublin.