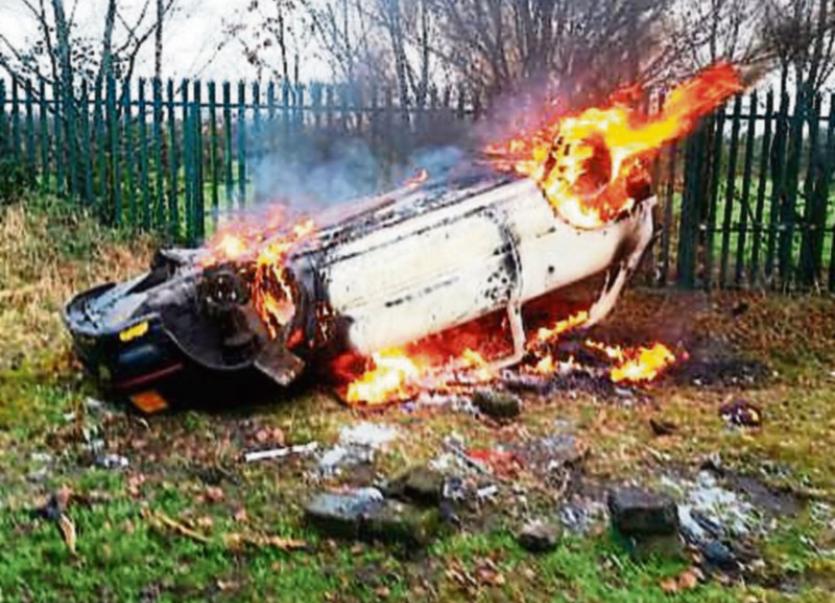 The owner of the car posted this photograph on social media

GARDAI say a 'thorough investigation' has been launched into allegations that a car was burned out in front of its owner after it was stolen from the car park of the Crescent Shopping Centre.

Gardai at Roxboro Road station have confirmed the car, which was reportedly stolen on Saturday afternoon, was set alight in Southill the following day.

The incident has attracted national media coverage after the father of the car’s owner took to the airwaves on RTÉ Liveline on Monday afternoon.

The man, who was identified as ‘Anthony’, told listeners that his son received a ransom demand shortly after posted a message on Facebook after being alerted to the theft of his car – a Toyota Starlet.

Anthony described how the man who contacted his son in response to the Facebook post claimed he knew where the vehicle was.

The caller, he said, asked for €1,000 (for the return of the car) and arranged a meeting “down an alleyway in Southill” after agreeing a figure of €750.

"It went downhill then and they were ringing me saying they were going to take the car apart and take the wheels off it."

Anthony said he and his son travelled to a specific location in Southill after he learned through “a contact” of the car’s location.

Following their arrival he described how a group of youths turned the car upside down and set it alight in front of them.

“They threw a gallon of petrol up on it and set it alight. They were looking at us roaring and laughing,” he said adding that he decided to contact Liveline to warn other people.

"These people still exist, they are not people you can talk with or reason with. They are pure scum,” he said.

Gardai at Roxboro Road are investigating the incident and can be contacted at (061) 214340.