Ticket scramble kicks off as Munster surge into knock-outs 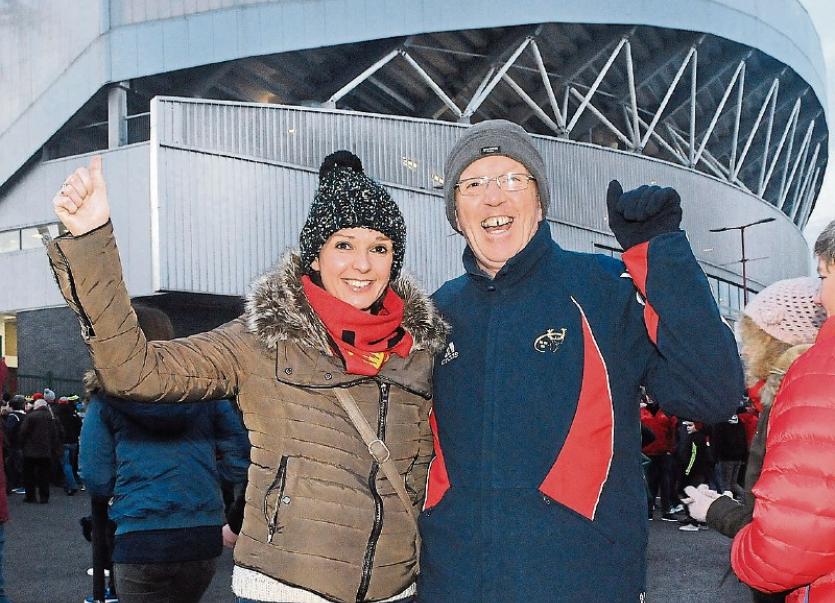 Marching on! Munster supporters Denise and Denis Goggin at the Racing match

A HOME Champions Cup quarter final in front of a baying Thomond Park crowd, with the prospect of a semi-final in the Aviva in the offing – the glory days are truly back for Munster.

After 12 wins in 13 games since the sudden and tragic passing of Anthony Foley, the province has surged into a first European knock-out game in three years – facing the same opponents in Toulouse, the aristocrats of French rugby – and a ninth home quarter final in total.

Success on the pitch is replicated off it, with Limerick to enjoy an estimated €10m windfall from the quarter-final game on the first weekend in April.

A spokesperson for the Champions Cup confirmed to the Leader that the date for the Thomond Park clash will be set “on or before Friday” of this week, with the pick of the draw seen as a late kick off on Saturday, April 1.

The victory over Racing 92 last weekend saw a fifth full house of the season and a record equalling attendance at Thomond, with extra seating swelling the crowd numbers to 26,200.

The scramble for quarter final tickets has already begun, and Munster Rugby has confirmed that ticket allocations will go to “10 year ticket holders, clubs in the region, the Munster Rugby Supporters Club, contractual obligations and the visiting team”.

Mayor of Limerick, Cllr Kieran O’Hanlon, said he was “thrilled that Munster have earned the right to a home quarter final.

“It means so much to the club and supporters as is a sign that Munster is returning to the force it once was. It also means a lot in economic terms for Limerick city and the Mid-West region.

“Thomond Park can expect a capacity crowd for the home quarter final on the weekend of the first weekend in April. This will undoubtedly mean a boost for the hospitality sector – from hotels to restaurants to bars.

“Limerick is 100 per cent behind Munster Rugby on their march to the finals in Edinburgh and we wish them every success.

“The people of Limerick I know will give the supporters from Toulouse a very warm welcome when they arrive here and I wish them an enjoyable weekend in Limerick,” he added.

Chamber CEO James Ring said the knock-out game was “another great opportunity for the city to put its best foot forward in front of a huge national but also international audience.

“It’s going to be another magical weekend. There’s an awful lot of emotion behind Munster since Anthony Foley’s sad passing last October and I’ve no doubt Thomond Park and the city generally will be highly charged again for the quarter final.

“I know from a business perspective, we will be rolling out the hospitality in the way that Limerick does best. Games like this have done so much for our economic wellbeing and this will be no exception.

“But they have also done wonders in terms of spreading the word about just how special Limerick is to visit. The proof is in just how busy our hotels are. People come back time and time again.”