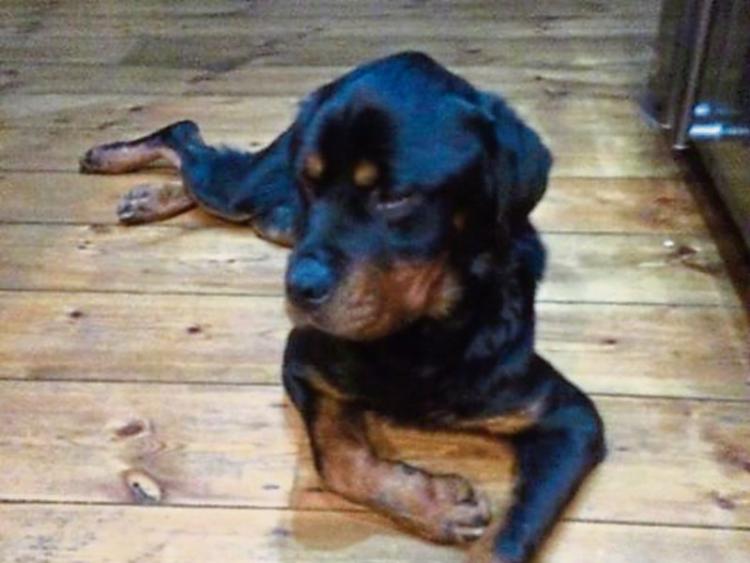 Robin back back home in Murroe this week

ONE OF the Rottweilers stolen from the Murroe home of Peter Clohessy and Anna Gibson Steel has been found in the Wicklow Mountains an incredible nine months after being taken.

“We got her home late on Saturday night. It is quite an incredible story,” said Anna.

“On Wednesday night at 1.30am a chap called Frank McHugh, who lives in the Wicklow Mountains, was driving home. He saw a black heap that he kind of knew was a dog but he thought it was his own sheep dog. So he stopped, got out and saw Robin.

“She was so weak that she couldn’t stand. They lifted her into the car, brought her to the vet the next day and he said there was 24 hours max left in her,” she continued.

Frank’s daughter Ciara put up a photo on her Facebook page and somebody who saw the posts last April contacted Anna.

Robin is now back home in Murroe and is being “ruined!”

“She is quite shook but a lot of tender loving care and she'll be back to her bouncy self soon. It was a miracle and a miracle that the dog had the fight to keep going against all odds,” said Anna.

However, having Robin back is “bitter sweet” as Jessie is still missing.

“When you see the state of this lady your heart gets a bit sad thinking of her but hopefully… Until someone proved to me they were dead they were alive so hopefully this might raise awareness about Jessie,” said Anna.