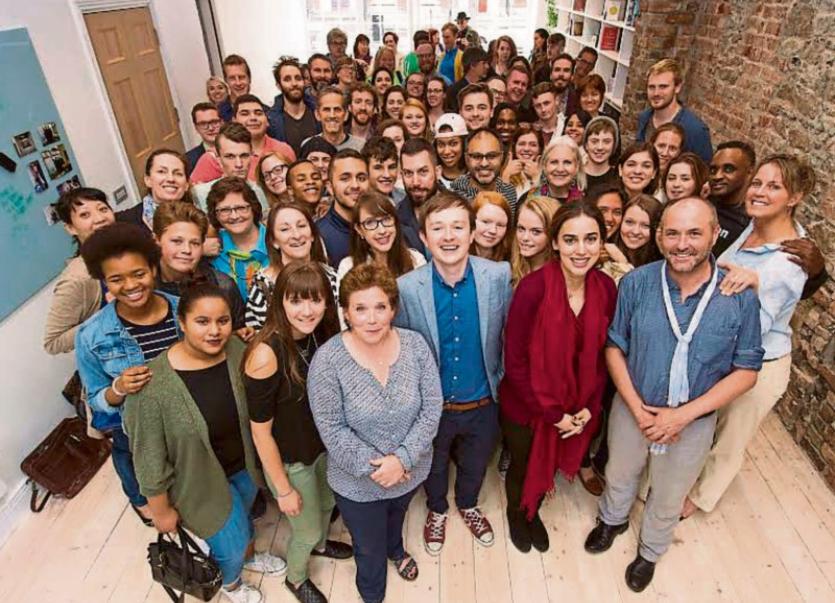 Colum McCann, far right, and supporters of Narrative4 at their global headquarters on Limerick's O'Connell Street

ACCLAIMED author Colum McCann has described Limerick as a city which is witnessing a 'revolution in how it perceives itself'.

Speaking at the headquarters of Narrative 4, a non-profit global organisation which promotes social change through storytelling and creativity, McCann praised the city's advancement in the arts and across several fronts.

“To see what's happening here is truly, truly extraordinary. It's an evolving story in itself. I think the people of Limerick, and the City and County Council, everybody needs a grand round of applause, because this is part of a revolution in how we perceive ourselves,” said the Let the Great World Spin author.

“In particular, it seems that something is bubbling up through Limerick. I don't know what it is, but we're hoping to tap into it. We have the most amazing young people in this organisation,” said McCann, a co-founder and president of the group, which originated in New York and is now headquartered in Limerick.

The award-winning Dublin-born author earlier described Limerick citizens as “the fire, the guts and the desire for change”, and said the Treaty City is “a model city for how to fundamentally shift perception.

“It feels like the time has come for Limerick”, he said. “It’s vibrant and edgy and new, and I feel aligned with the city. The city has a story to tell the world,” he said.

Narrative 4's global offices in Limerick were opened last year, after it was originally founded by more than 100 artists from around the world, including Salman Rushdie, Sting and Ian McEwan.

It is supported by several high-profile Irish and American business people, including Loretta Brennan Glucksman, wife of the late philanthropist Lewis, the JP McManus Benevolent Fund, and companies including Amazon, and HBO.

Writing in the Limerick Leader newspaper this week, John Moran, the former secretary general in the Department of Finance, who is also a board member of Narrative 4, said that Limerick is “undergoing a renaissance”.

“We're at the beginning of our journey to reach our full potential. Limerick can respond in ways few 'old' cities can do. With Ireland's population approaching 6.5 million by 2050, Dublin can no longer absorb such growth. Regional cities have to play a greater role and Government is finally making increasing noises of understanding this,” he wrote.

Multi-millionaire businessman Denis Brosnan is currently driving a €500m package of investment and development in Limerick, aimed to capitalise on any gains in a post-Brexit market, under a new specially designated company, Limerick Twenty Thirty.

The company has four strategic sites across the city and its suburbs under its wing, including a major film studio in Castletroy, with a combined 1.4 million sq ft of prime real estate, which is poised for development.

The businessman, who has quietly been driving the city’s fortunes in acquiring four major sites since 2009, has also said that the target of creating 5,000 jobs in Limerick within the next five years “will be exceeded many times over”.

Separately, a 14-storey office block on Bishop's Quay along the waterfront, which will include 42 luxury apartments and 150,000 sq ft of commercial space, in a €40m development has also been granted planning permission.

Construction is expected to start in March under Kirkland Investments, led by Rudi Butler, son of former developer Robert Butler, and with financial backing from Riverdance star Michael Flatley.